Hey everyone!  By now, you probably have seen the opening ceremony for the Winter Olympics.  I was assigned to cover it last night and it’s always a cool sight to witness.  This one was really tough as at times I couldn’t feel my fingers! In fact, here is my attire for the night…(They did provide us with some nice swag too to help keep us warm, but it was the coldest I have ever been in my life. Thank God for hand and foot warmers! 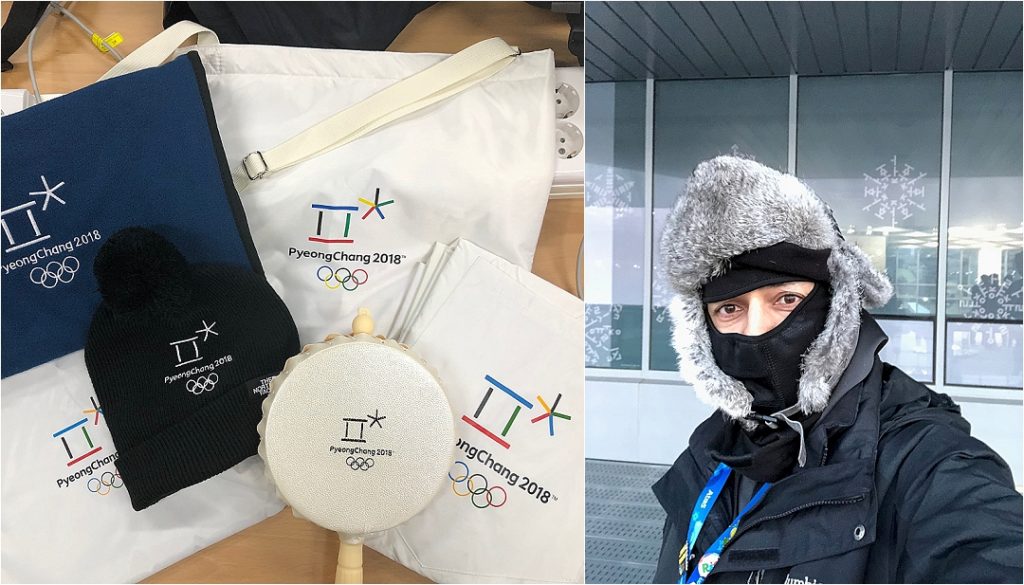 The ceremony itself was wonderful as I knew it would be. Opening ceremonies have always been something that I looked forward to growing up and to now see them in person and capture photos of the moments that will go down in history still has me pinching myself!

My assigned position was a level under the dignitaries above on the third level of the stadium. It was a great view when the wind wasn’t howling and blowing the cameras around!

The show started with a cool Tiger and some sort of story with these kids.(I thought it was a Stranger Things theme when I first saw the kids pop out!) 😂😂 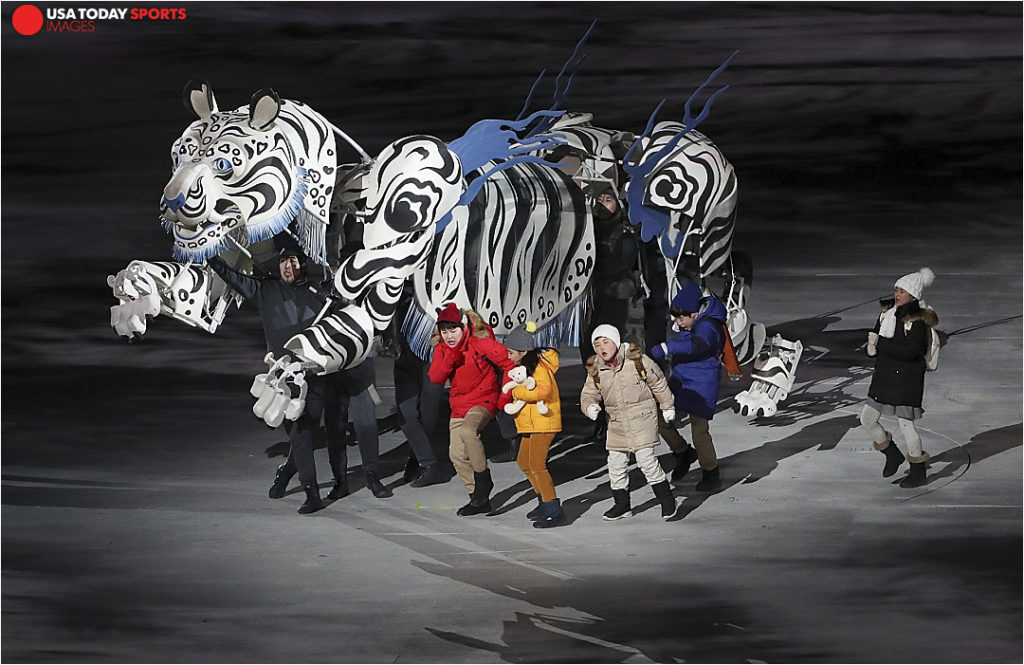 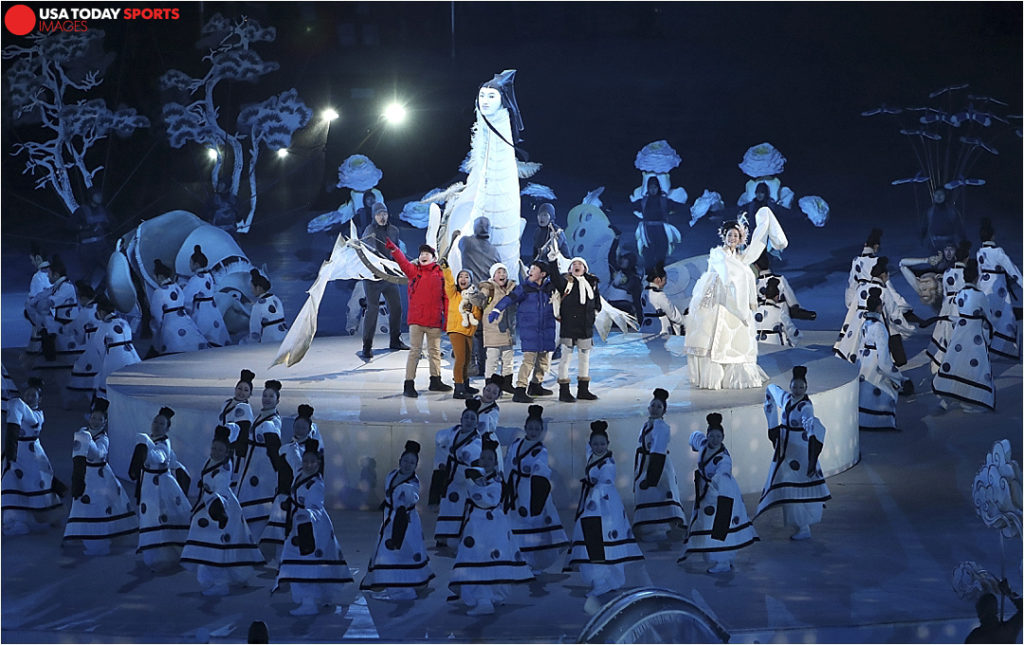 The way they do some of these special effects is seriously mind blowing! 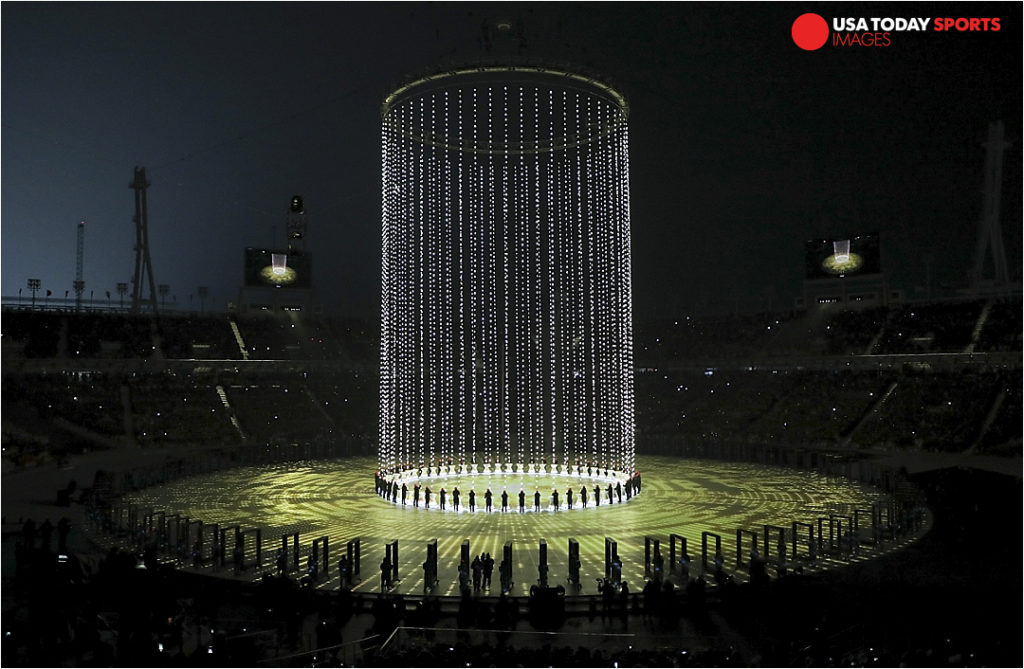 Next it was time for the athletes to walk through and there are always some great moments!

Led by flag bearer Erin Hamlin, the USA made their way out…. 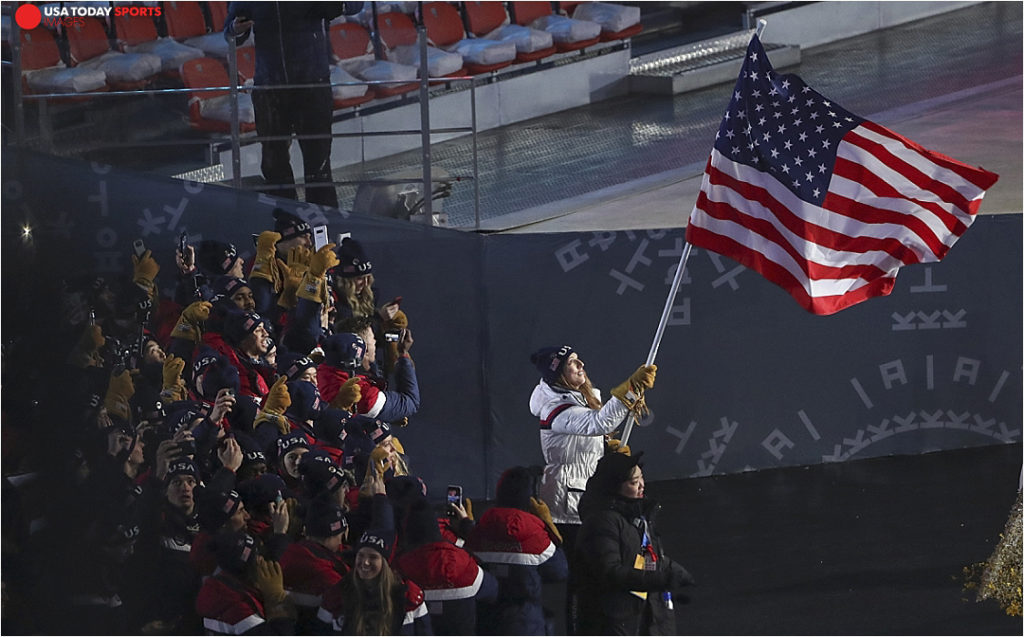 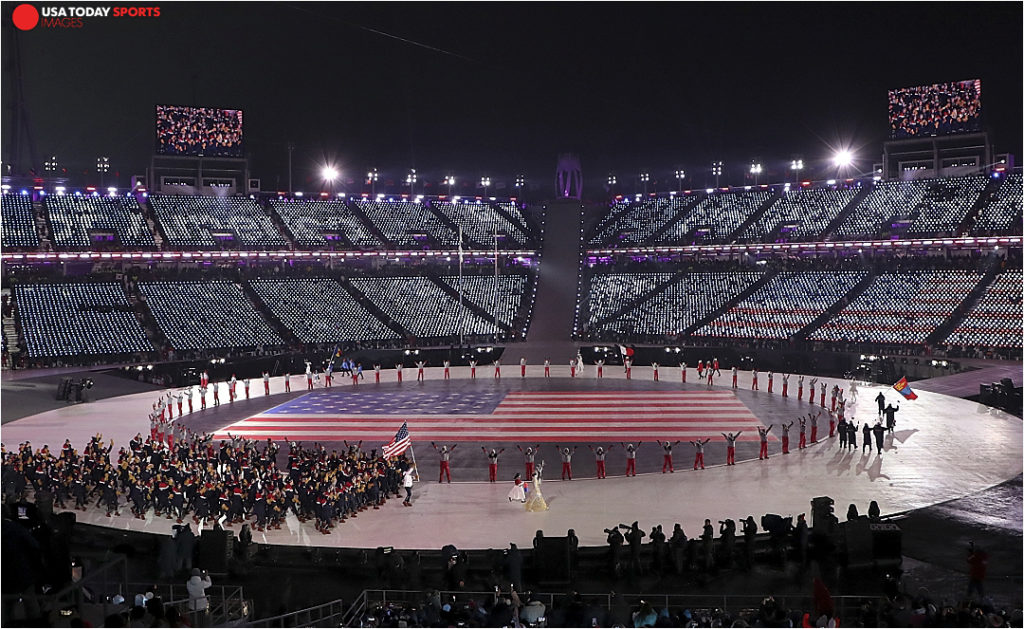 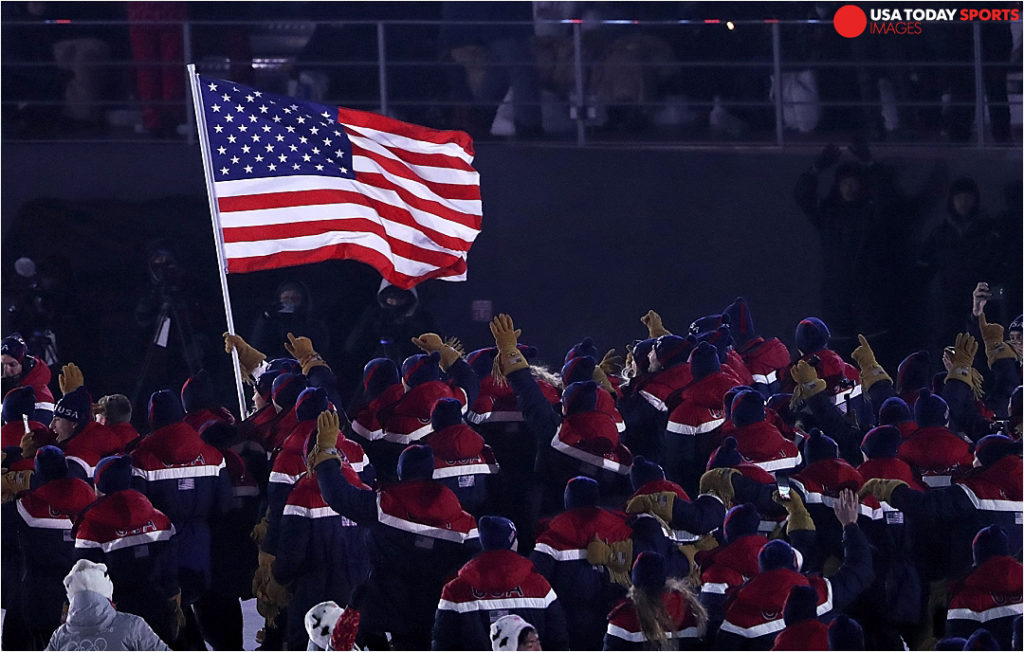 It was also cool to see the combining of North and South Korea especially in today’s political climate. It made for a really nice moment… 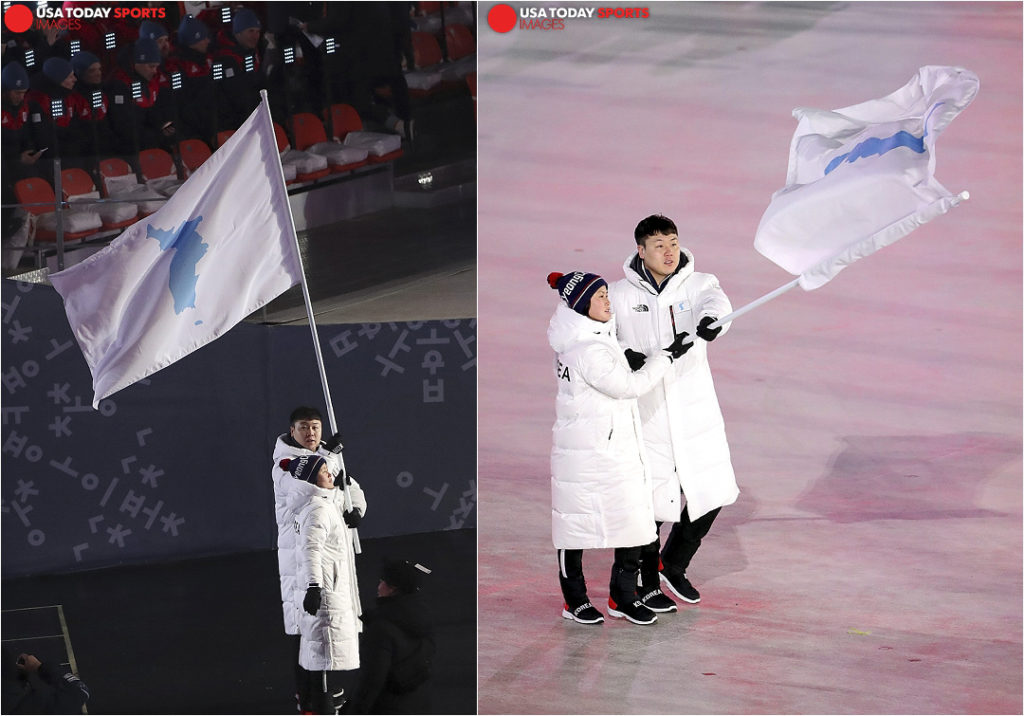 And how can I not mention the Tongan guy from Rio who qualified for cross country skiing and led their small delegation all oiled up with no shirt on! That guy HAD to be hurting after that!

I happened to look behind me and standing there with tears in his eyes was former NBA star Yao Ming.  I’m not sure why he was crying though.(Maybe it was just the howling wind in his eyes. 😄) 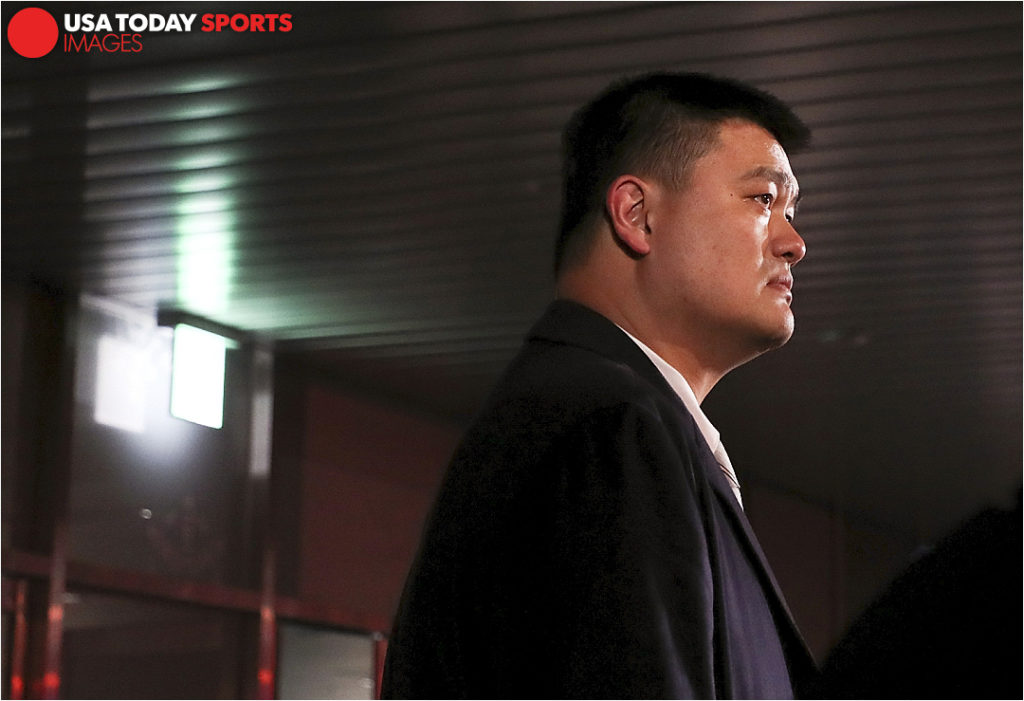 Here are a few more of the program highlights… 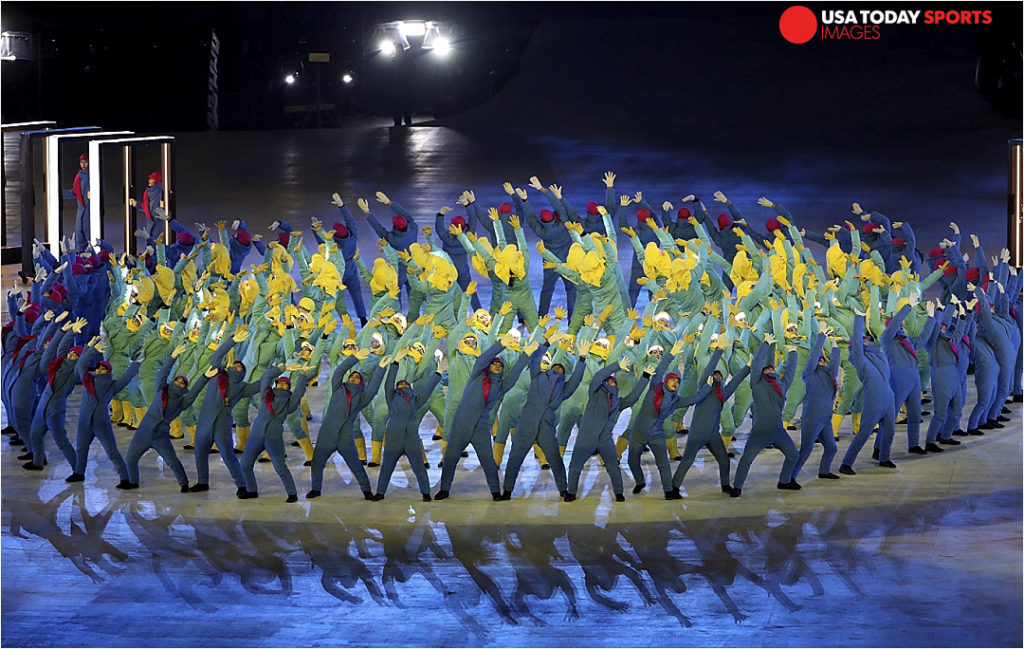 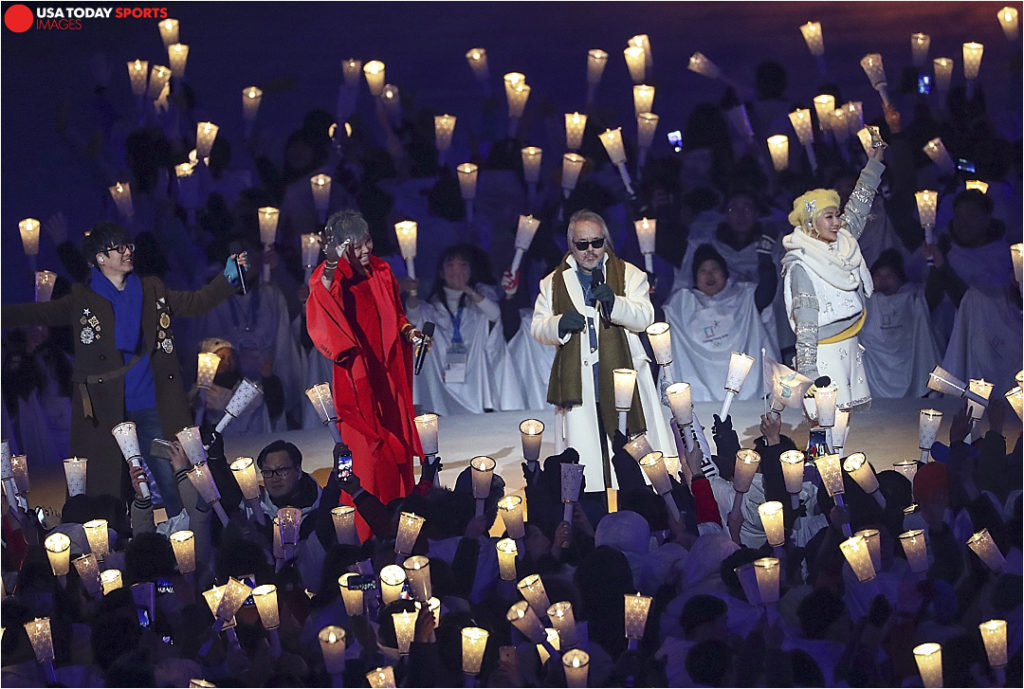 Always neat to see the Olympic flag being marched into the stadium! 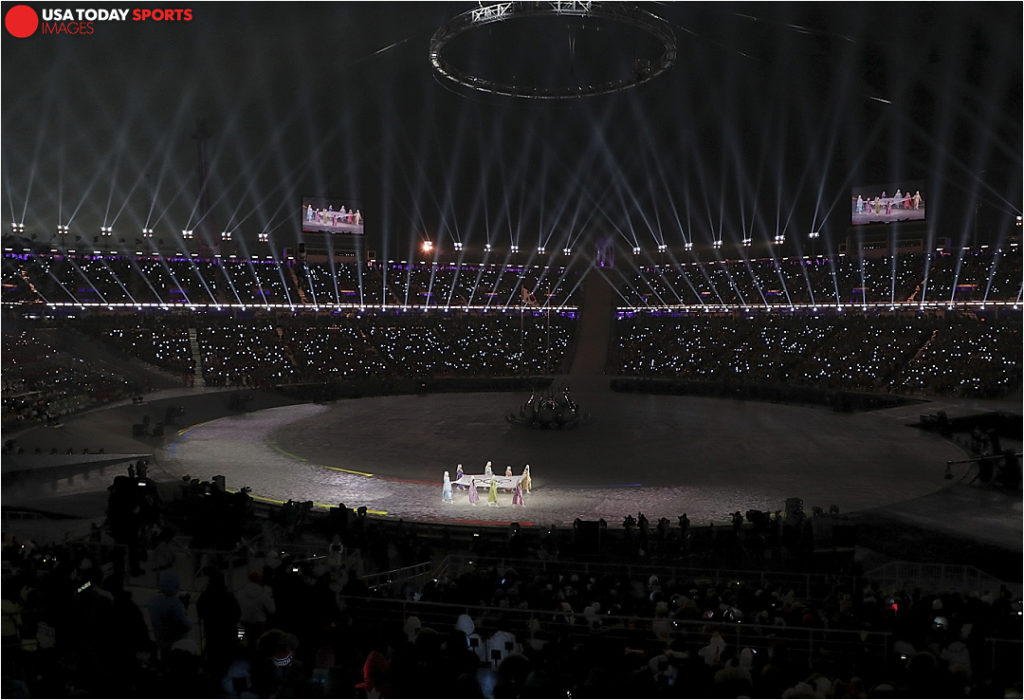 The lighting of the Olympic flame has always been one of my favorite things to watch on tv in the past and seeing it in person really gives me the chills! After an opera singer performed, the flame was lit by figure skater Yuna Kim and it was definitely interesting… 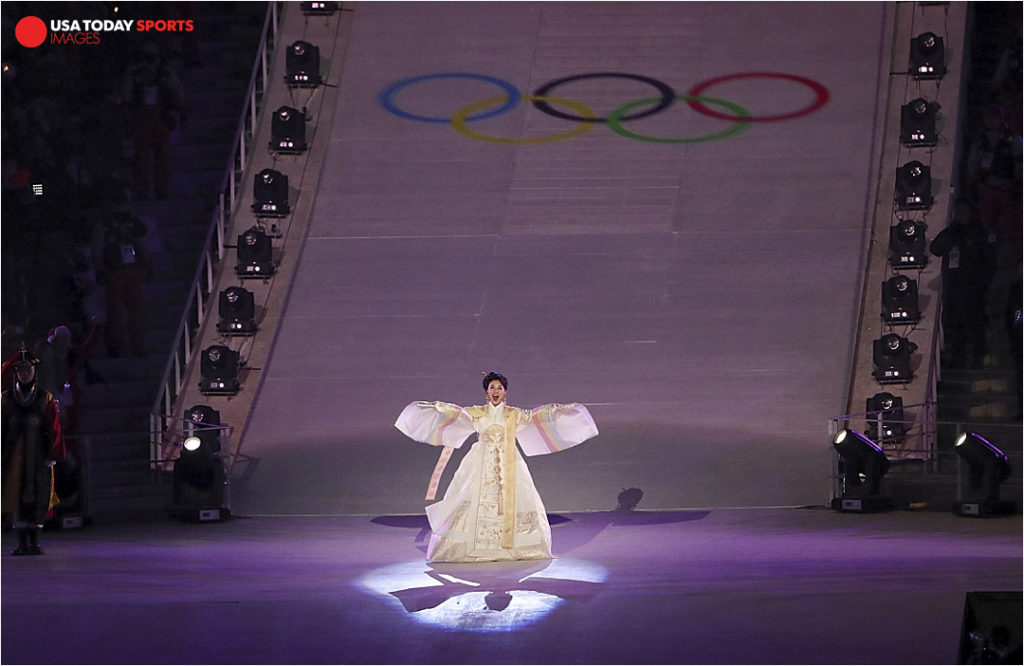 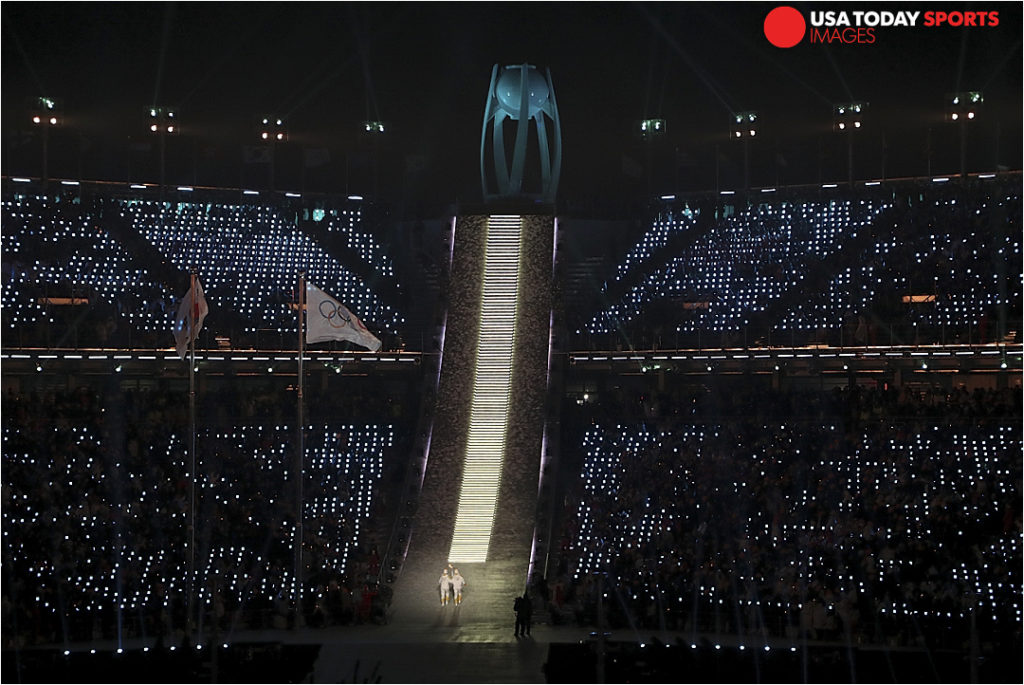 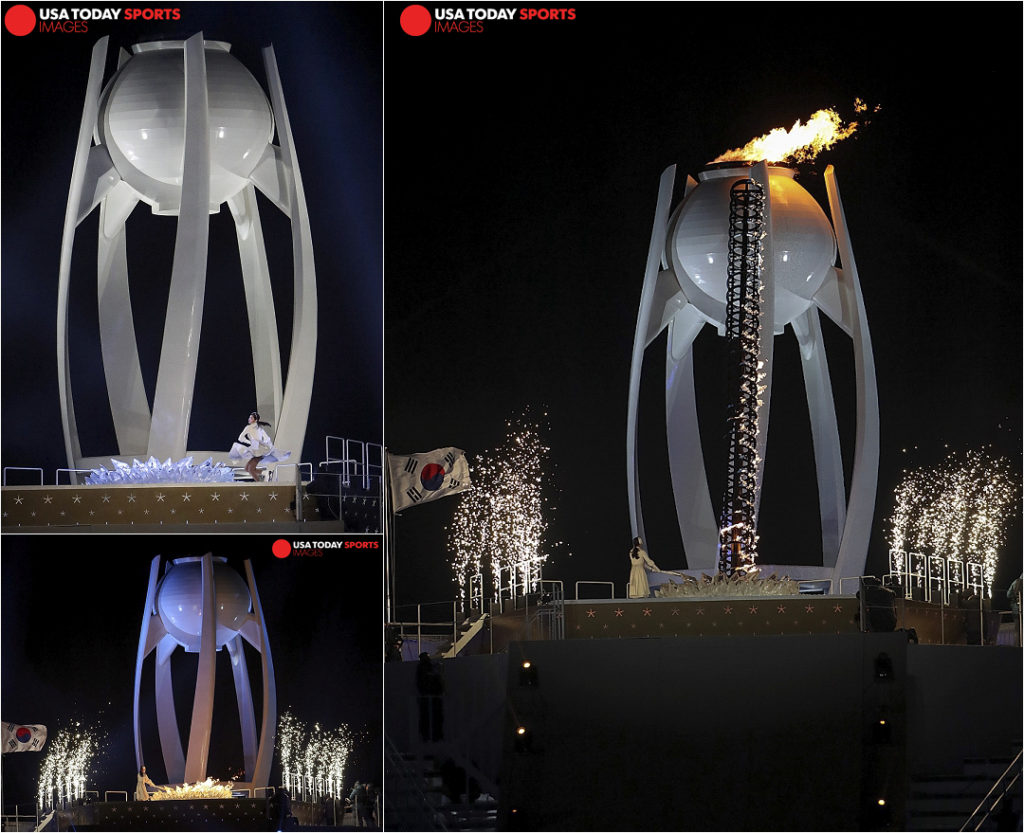 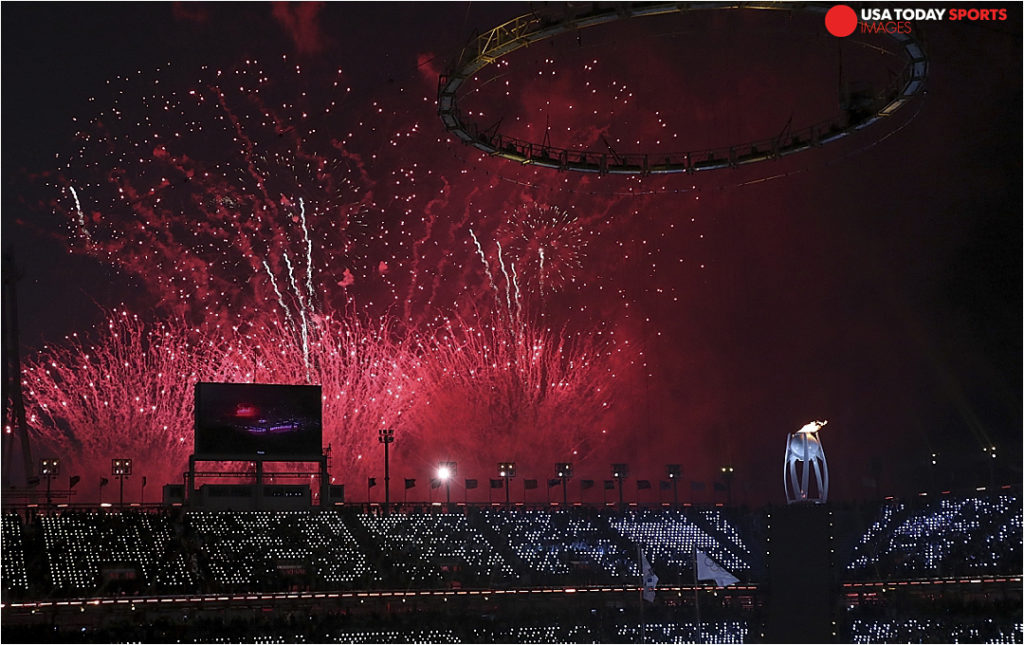 We got back to the room at about 2am last night and and I had a 6am wakeup call this morning as the Curling Mixed Doubles started at 9am.  I know absolutely NOTHING about Curling and have been watching videos and reading articles to understand it.  I always get excited to photograph new things and this was definitely on my list!  I do have to say that I think the sport could be improved by having a DJ and more of a party environment like Beach Volleyball, etc…

It actually looks like fun to play too!  Here are a few pics of my first try at it… 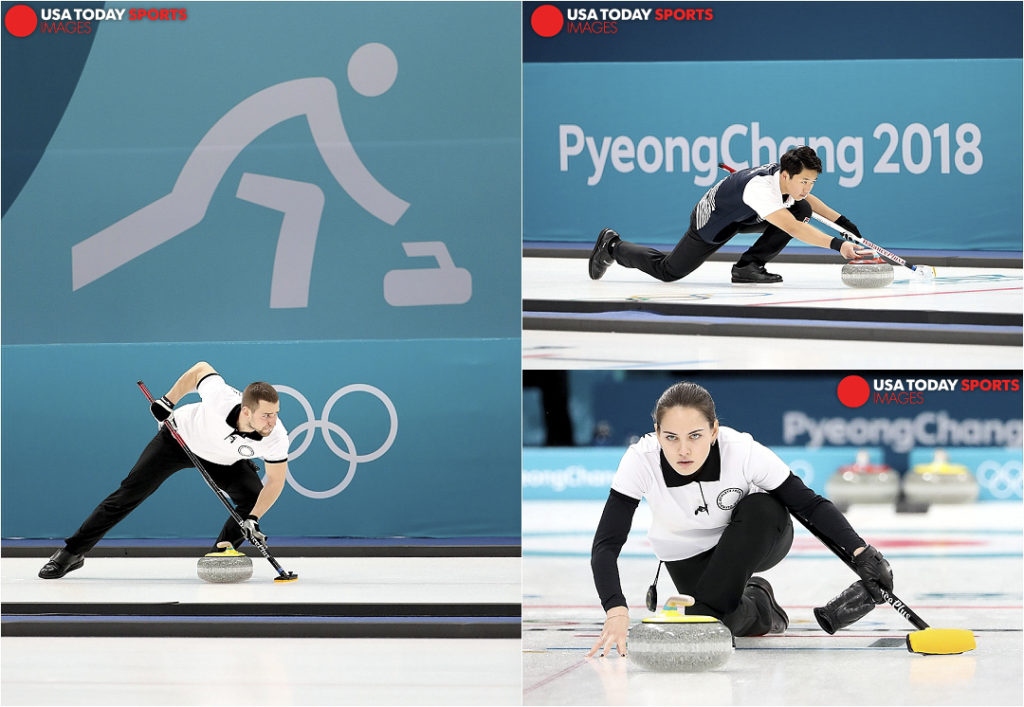 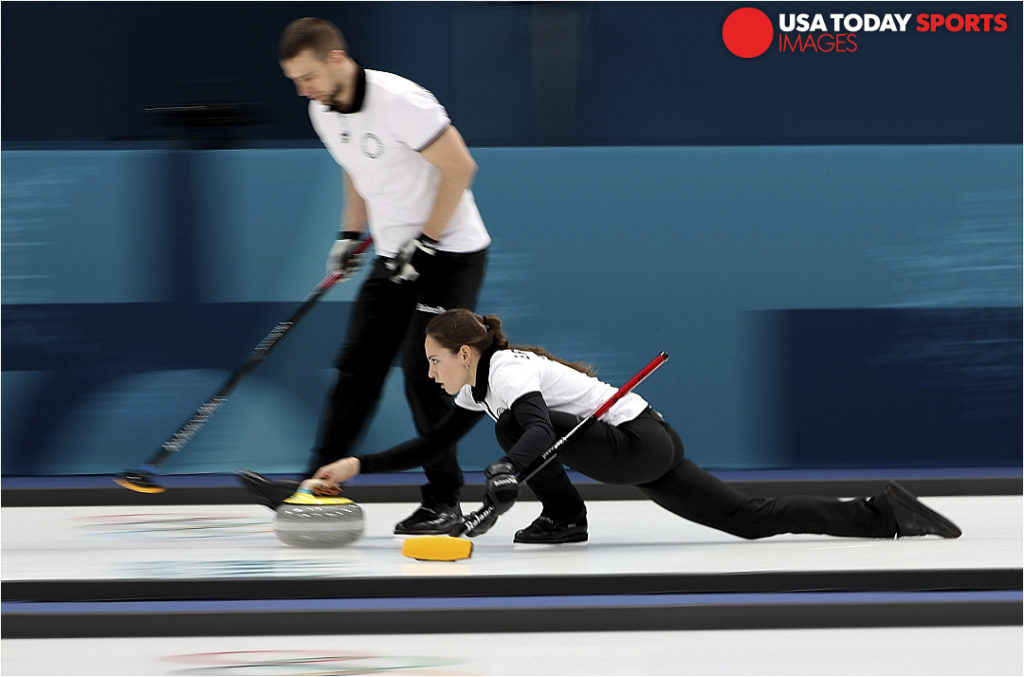 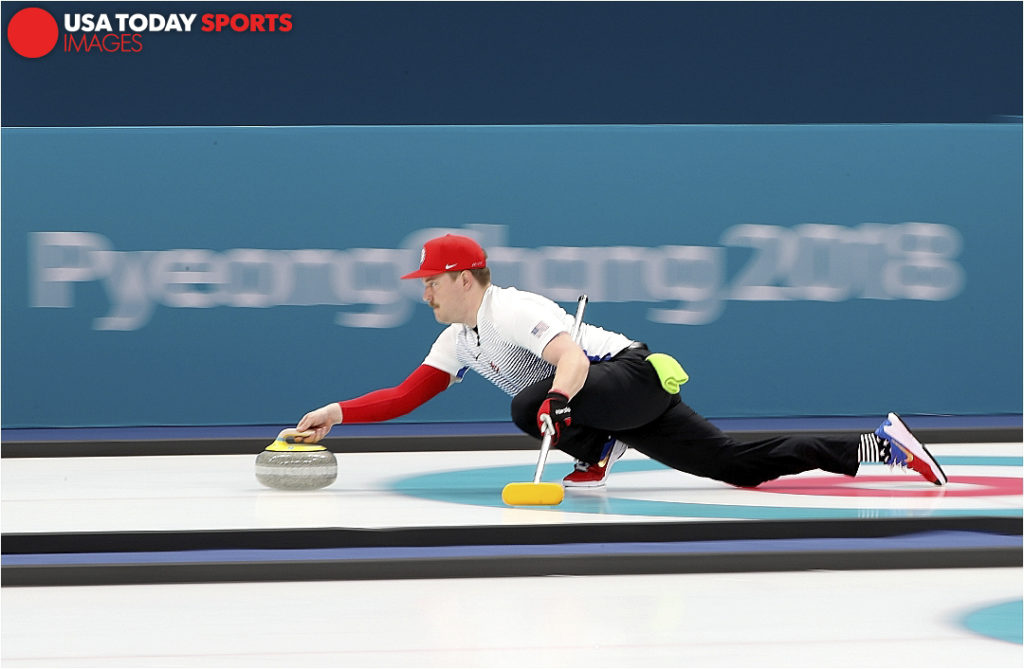 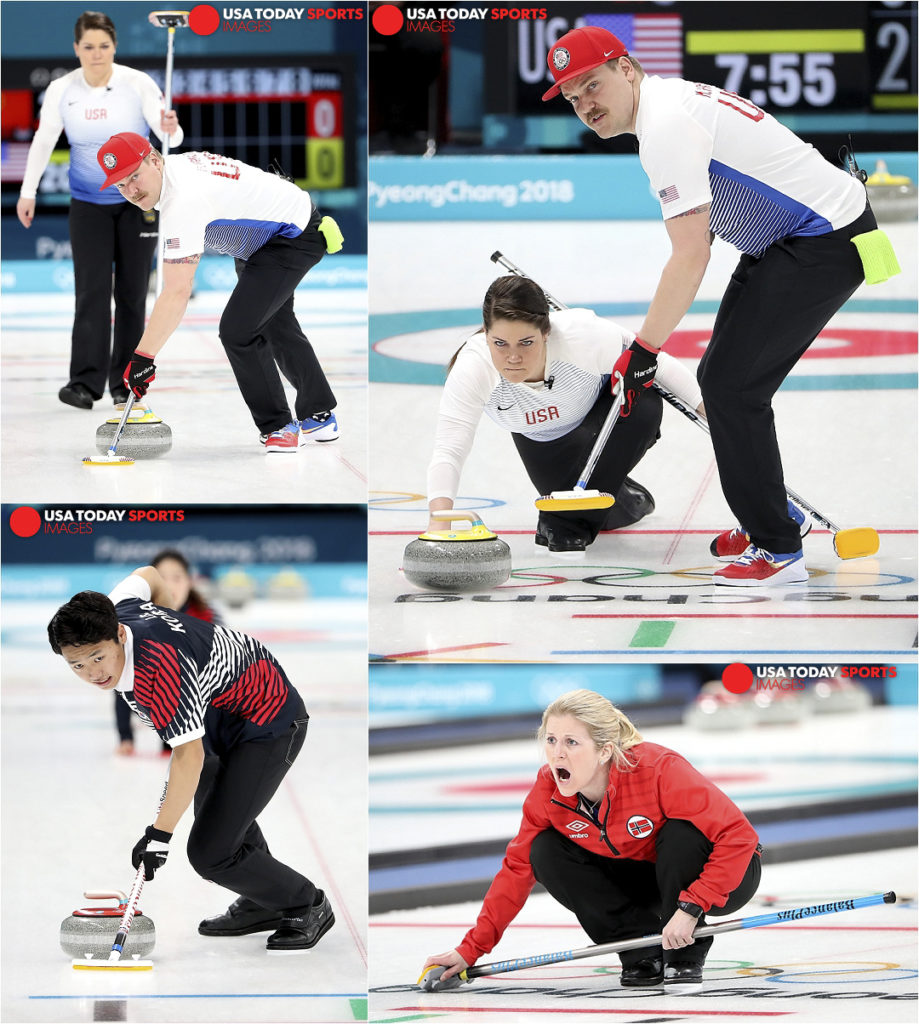 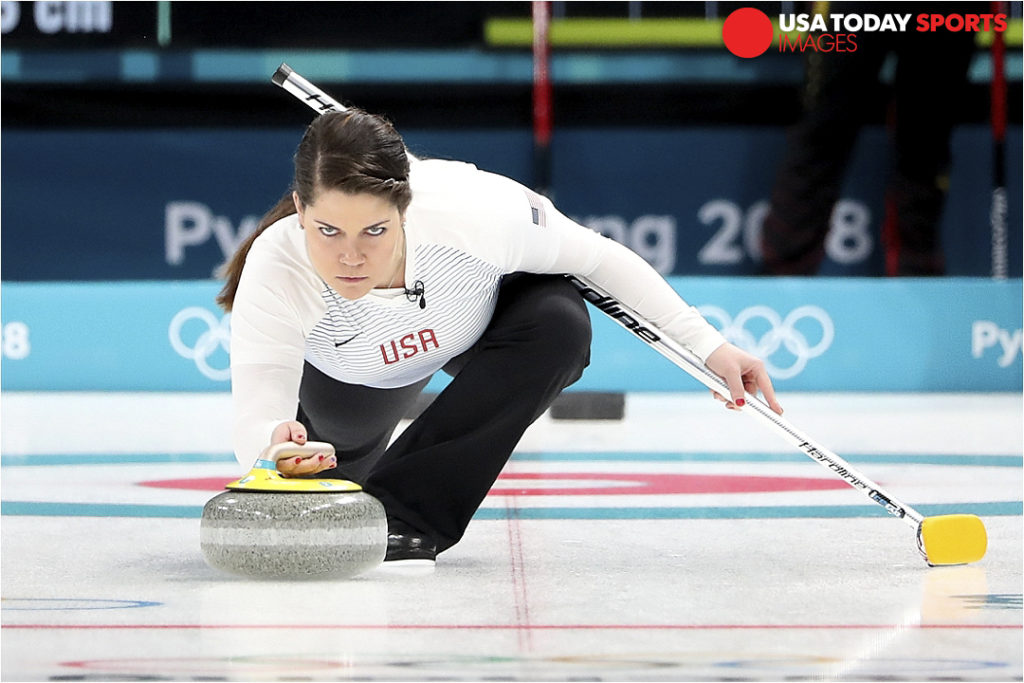 Each Olympic venue has a VMC or “Venue Media Center.”  There is a “photo chief” that is in charge of the venue and he/she are the folks to get to know as they make and enforce all the rules and they also set the photo positions that we can work from.  Another thing that each VMS has is free lockers that we can put all our gear in as big roller bags are not allowed at most venues.  I had a few hours in between Curling sessions today and decided to go check out the venue for Long Track Speed skating with my colleagues Robert Hanashiro and Dan Powers.  They had a race there tonight and I am on assignment there tomorrow.(Another first time event for me.)  They needed to check out lockers and so I of course took a quick iphone pic of them in action.  The below image is of what my locker looked like at Curling today… 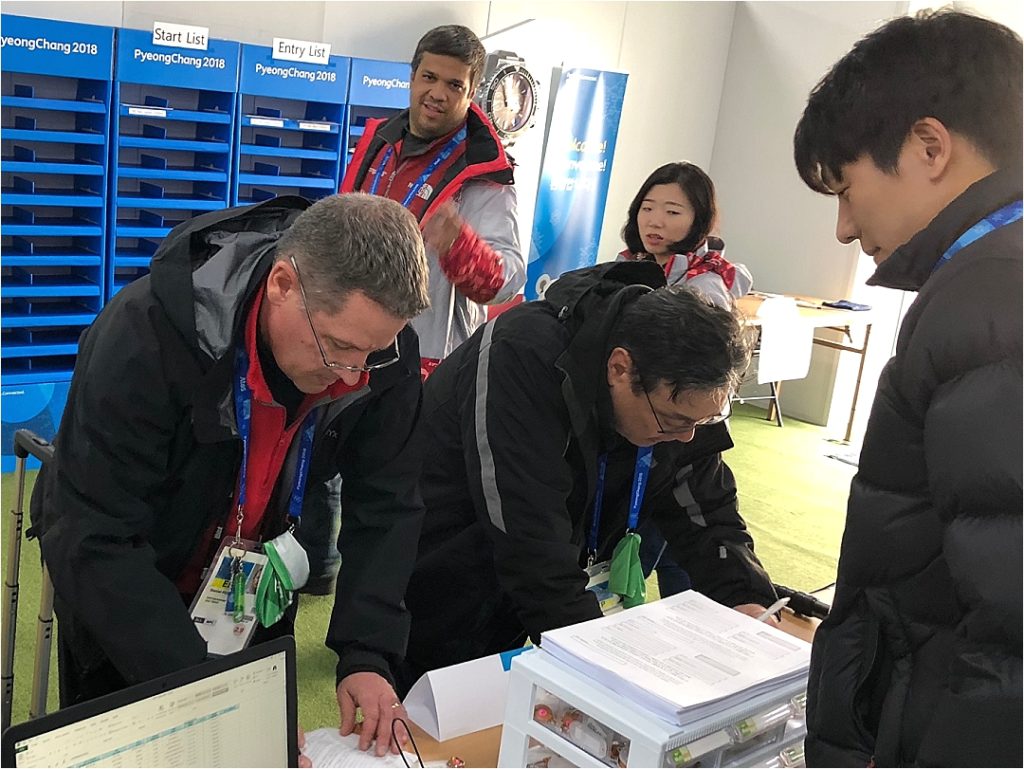 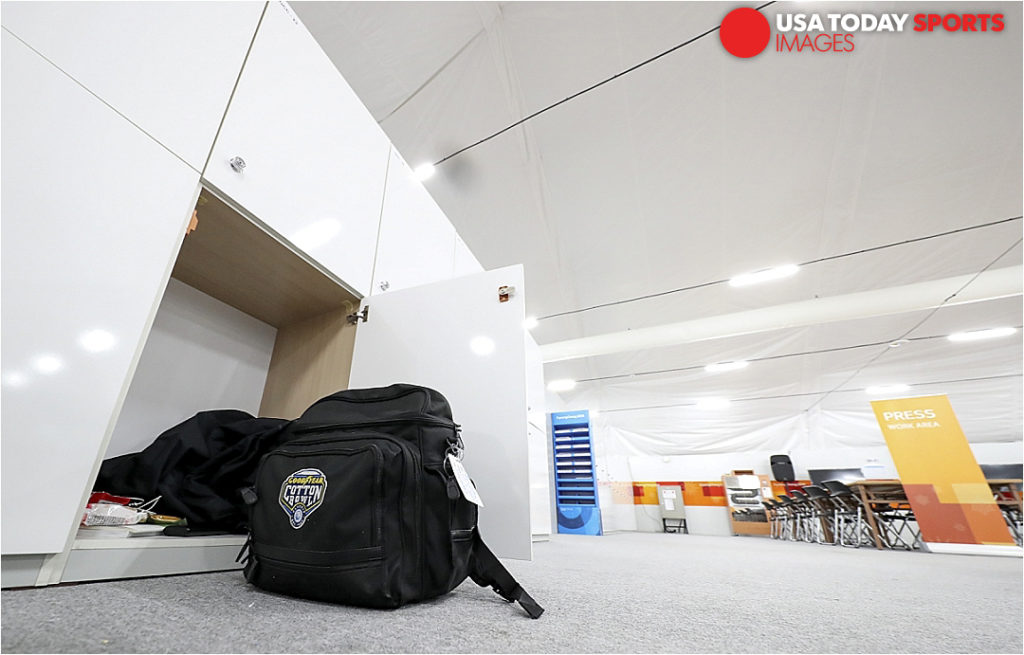 That’s all for now, but I am off to Speed Skating later and hope to get some cool photo and stories for the next blog.

Thank you Kevin! Your blogs and photos have become my favorite aspect of the Olympics.

Kevin, thanks so much for sharing your experience! It’s great to see it through your eyes and lens!

Kevin, thanks for sharing your experiences. It’s great to see the games through your eyes and through your lens!

These photos are awesome. I saw the ceremony and curling event. What an interesting sport. You capture those beautifully!

So much fun following along with you and feeling like we are part of the Olympics!!!
Keep on Sharing, stay warm, safe and have FUN!! M

Nice pictures from opening and the curling. Love her eyes in the last curling picture.

Awesome for this nonprofessional.. Heather is our daughter-in-law.