The Winter Olympics are in full swing now and over the last few days, I have covered Short Track Speed Skating, Luge, and Skeleton.  I think that I am finding my creative groove now after I found myself super tired after the first couple of days.  I think I found it just in time as I have had some cool moments to cover over the last few days!

Let’s discuss Short Track Speed Skating.  This was my first time to ever photograph this sport in person and I found it most akin to roller derby! The section where I was assigned filled up with photographers almost 2 and a half hours before the races started! (That’s what happens here if any Koreans are in contention for a gold medal.)

My buddy James Lang took this photo of me in the mosh pit of photographers.  I had my dark jacket on to blend in like I usually do, but it got so hot in there, I took it off.(Besides, I gotta support my Sooner colors, right?)  It’s almost like a game of where’s Waldo if you are playing at home! 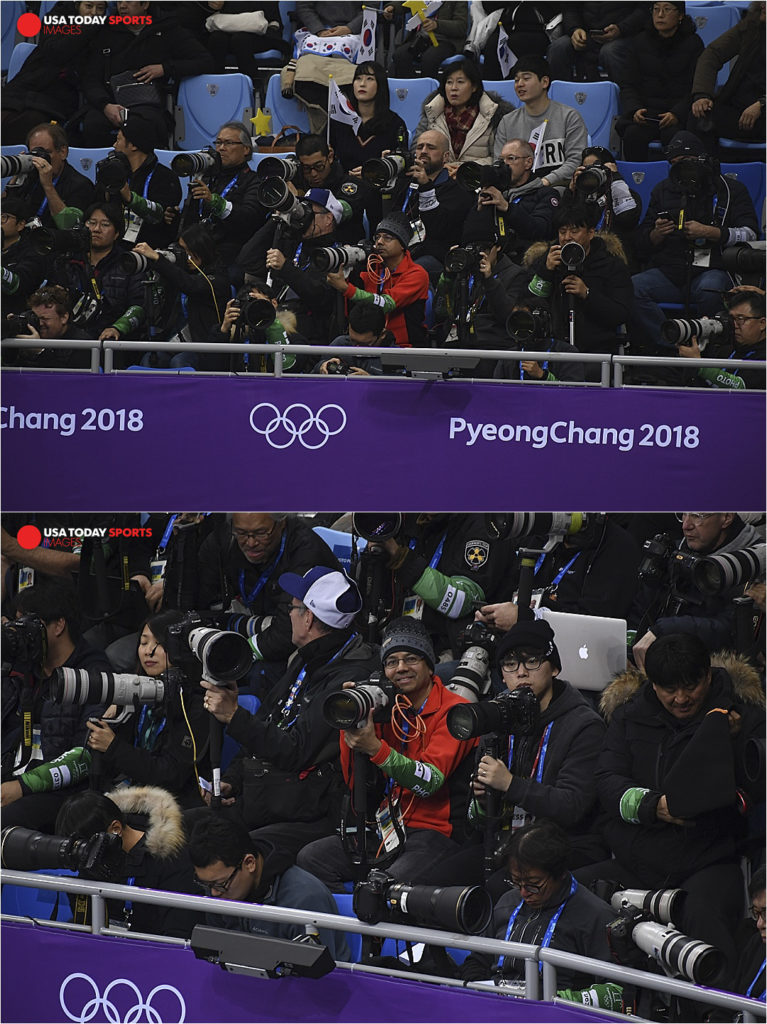 Short track speed skating was a blast to shoot though as chaos can happen anywhere at anytime!  In fact, I was able to capture a few nice crashes which made me happy.) 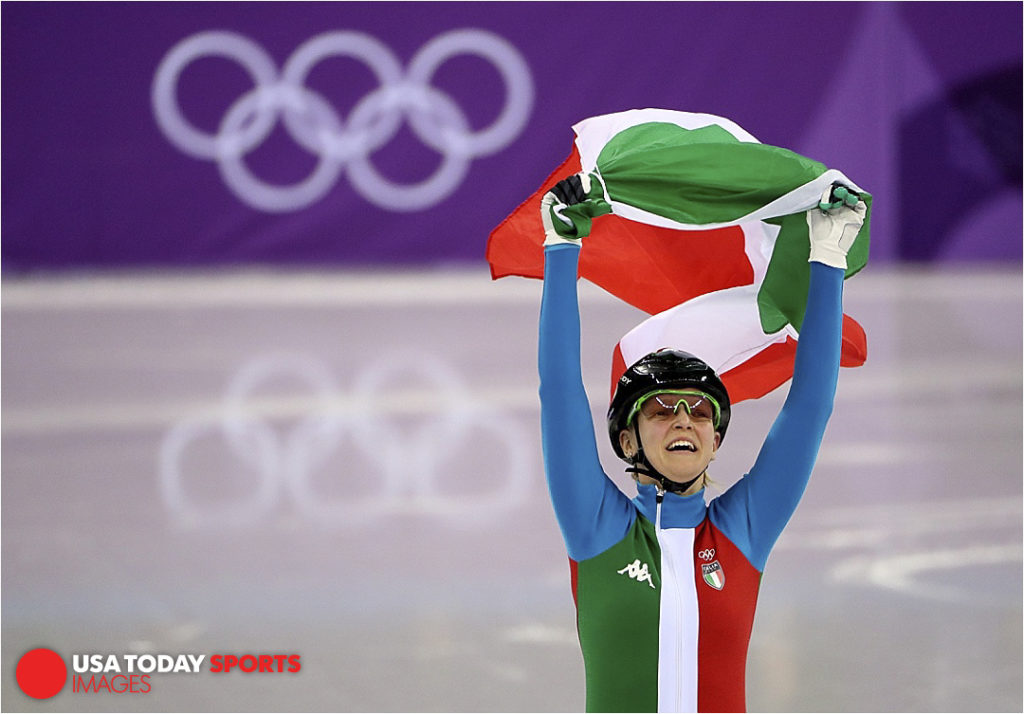 Next for me was Doubles and Team Relay Luge.  I was assigned to cover the finish line of the Doubles Luge finals and as you can see, the celebrations are pretty epic!  Germany finished 1st and 3rd with Austria getting 2nd. 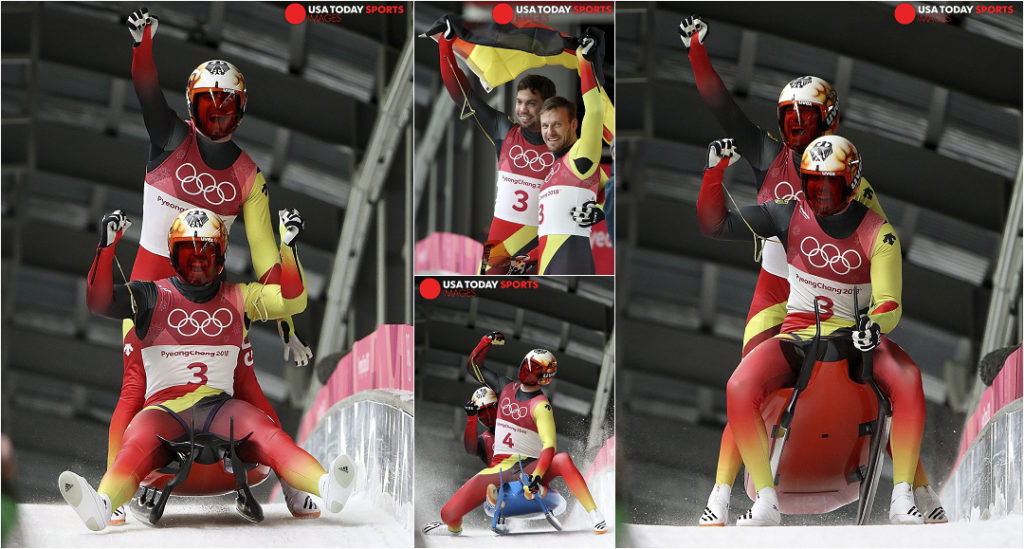 The next night was the Luge Team Relay consisting of Men’s and Women’s Singles Luge and Doubles Luge.  This was another wild event and was a heartbreaking 4th place finish for Team USA.  Being in the media, we are not supposed root for anyone in particular, but I have gotten to know Team USA pretty well over the last few months and they will definitely be medaling in the future! 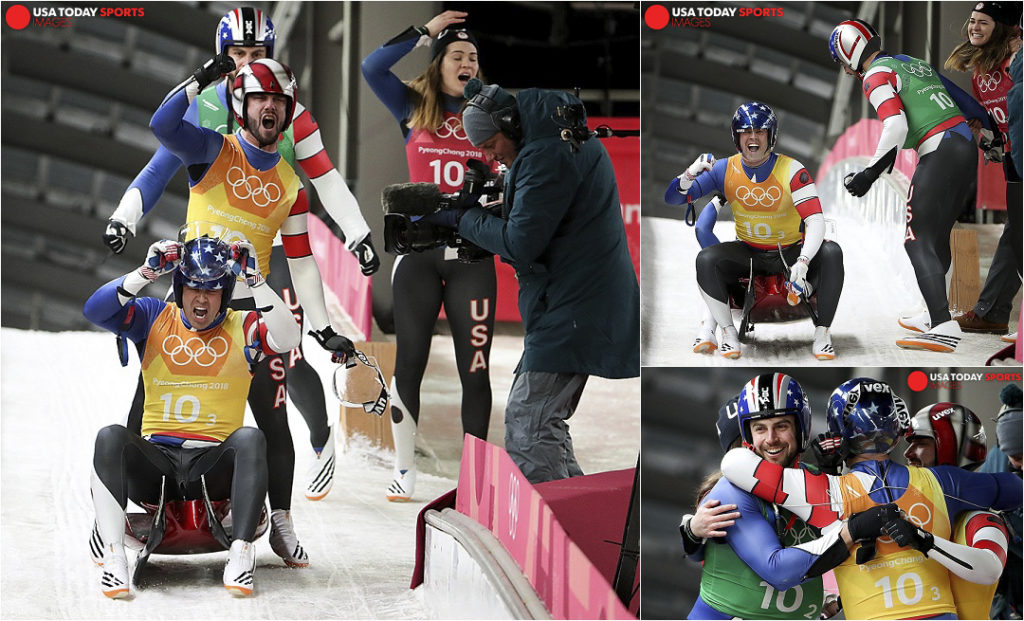 Next for me was the Men’s Skeleton.  This is one crazy and exciting sport!  It was made extra exciting because the favorite to win gold was Korean Yun Sungbin.  If that wasn’t enough, his Iron Man helmet was awesome!  In fact, my photo of him about to compete in an almost Iron Manesque pose has been very popular on the Internet!  In fact, it was even a Reddit topic!

Here are a few of my faves… 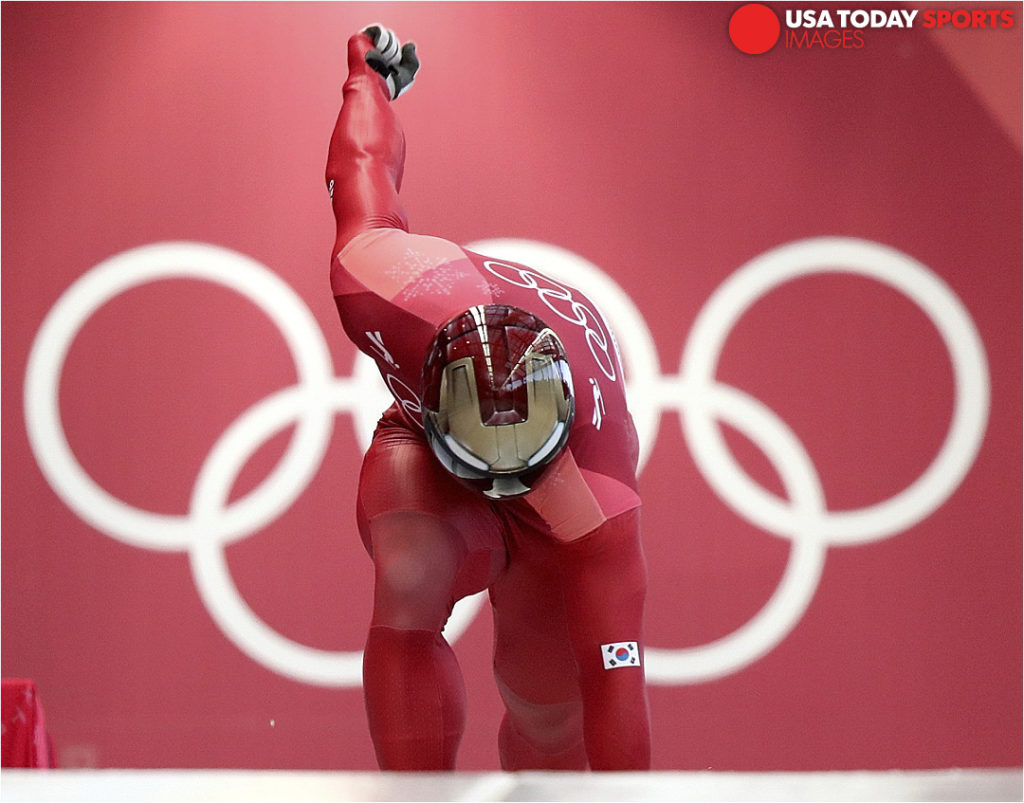 During the finals, a patch of light hit the track about a second after I was able to see the racers from my finishing position.  I played with the light for a few photos!

As you can see by the looks on the volunteers faces, the win by the Korean IronMan was very popular here!! 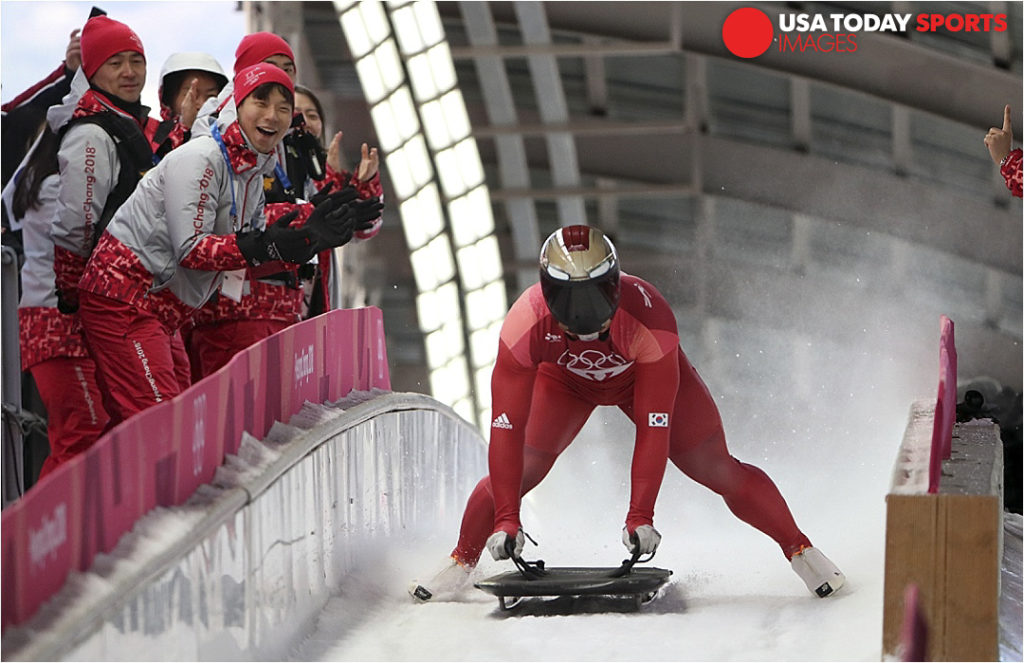 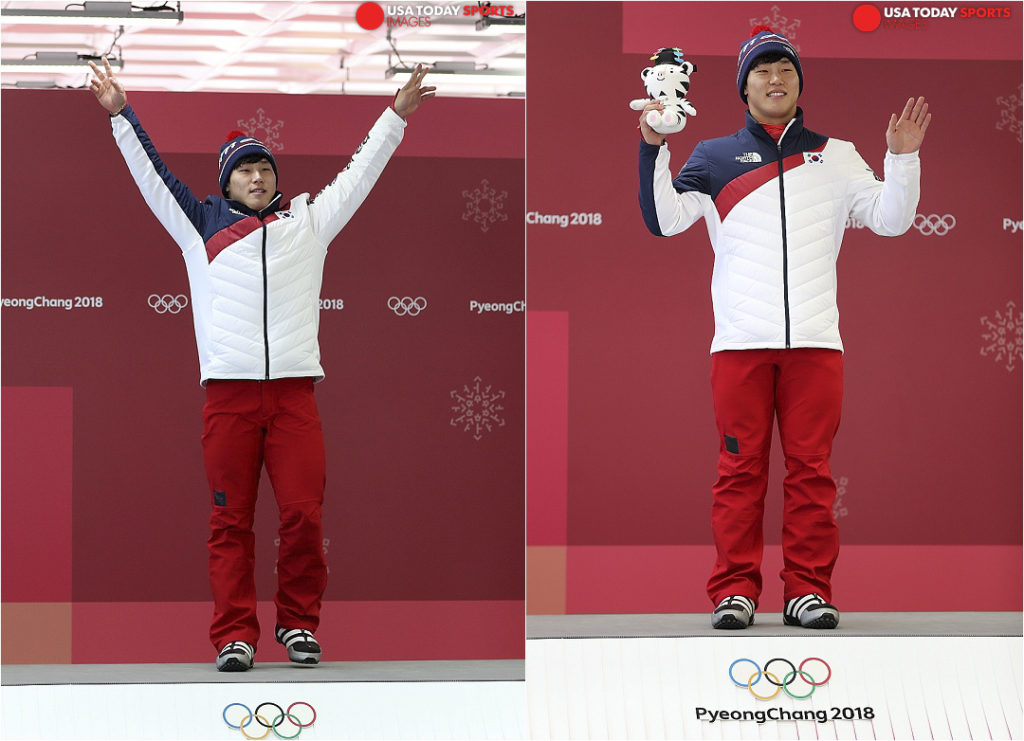 For the Women’s Skeleton, Lizzy Yarnold of Great Britain defended her Olympic title in dramatic fashion and it was great to see all of her emotions come out!  Here are a few of my faves from the event… 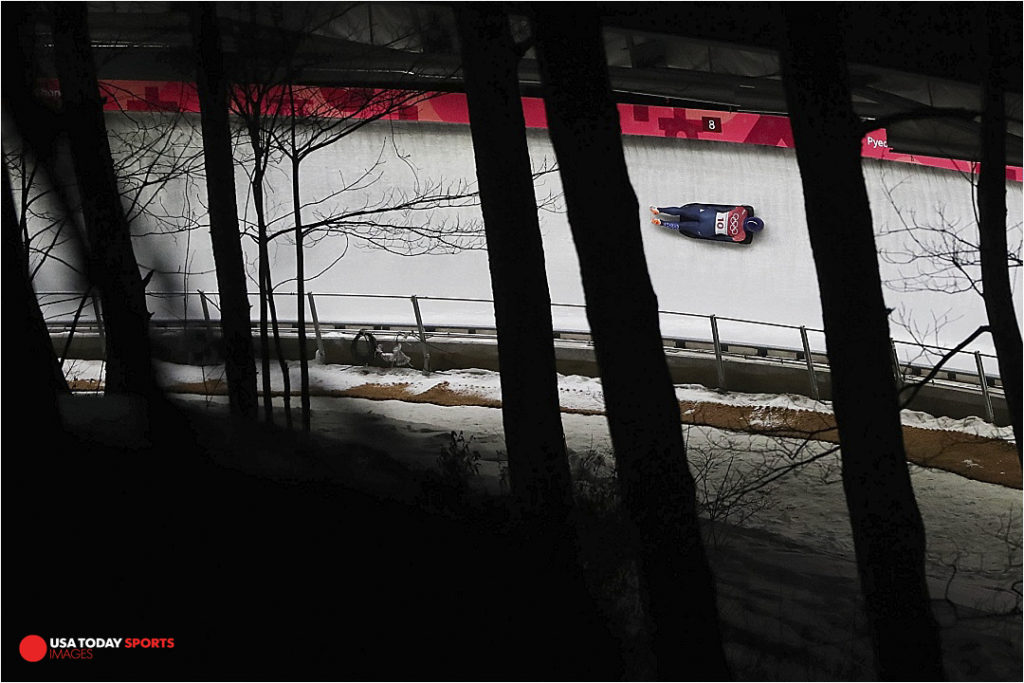 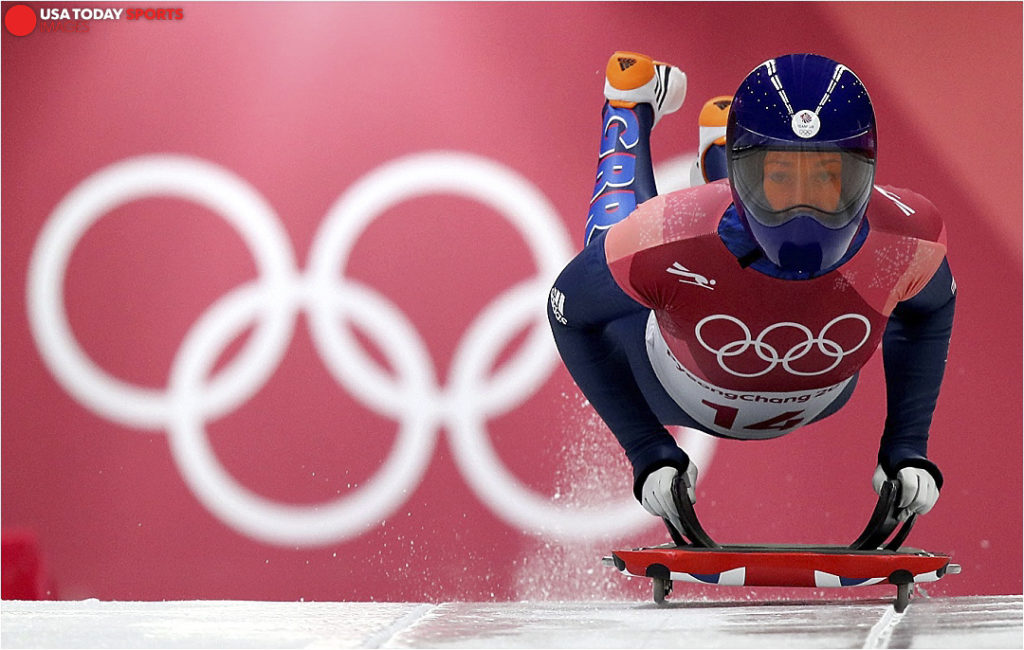 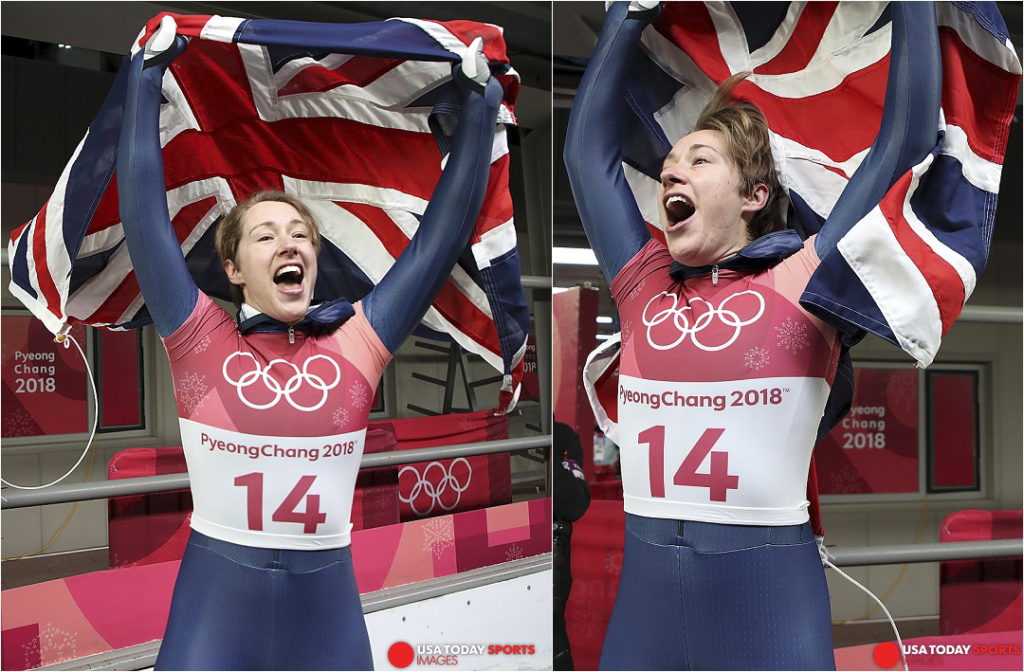 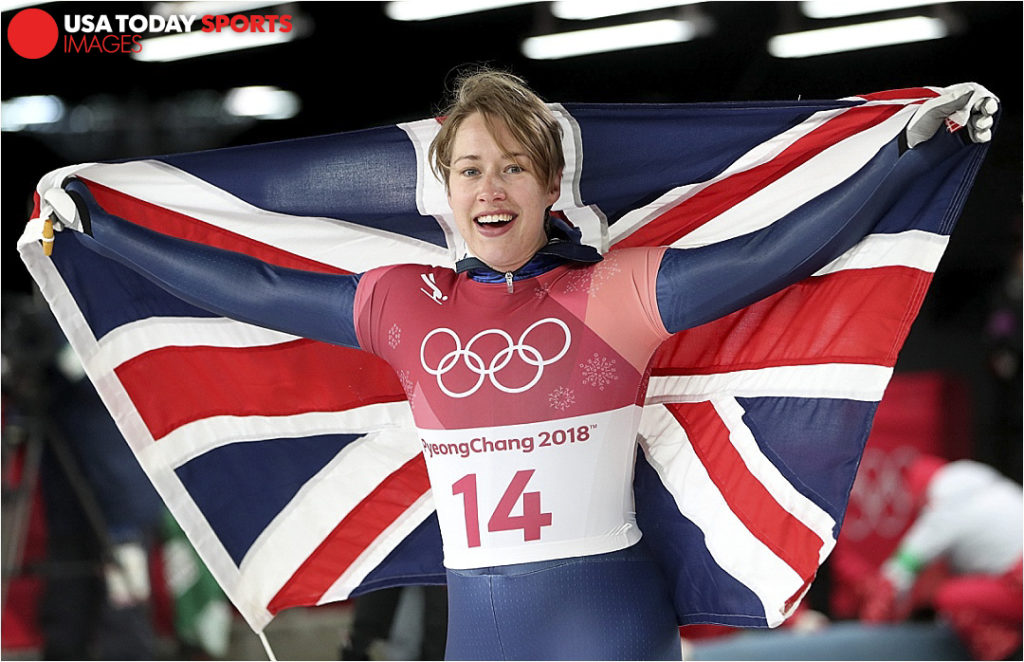 The last few days my schedule has consisted of early morning races followed by a break and then evening races.  Since yesterday was the Lunar New Year, everyone here seemed to be in a great mood!  In fact, at the MPC(Main Press Center), they served a complimentary meal called Tteokguk.  It was a big bowl of soup with rice cakes and it was quite good!!  I have to admit though that I am still pretty chopstick challenged! 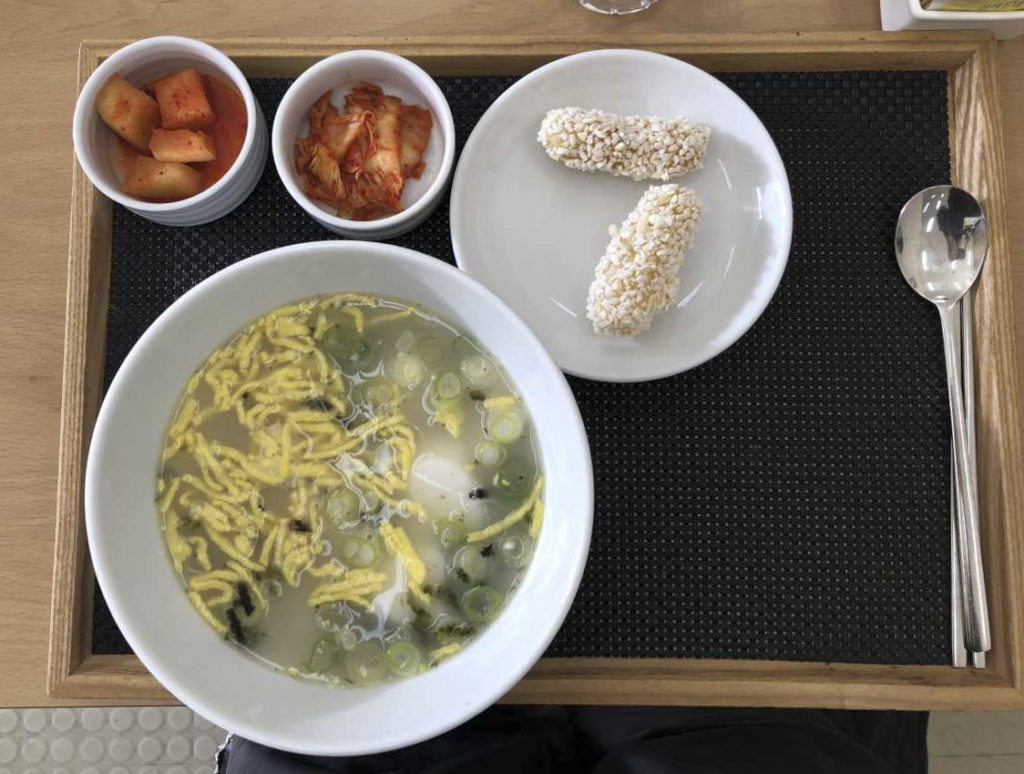 After lunch, we saw that they were making caricatures for all the media, so since we had a couple of hours before heading back to the sliding center, we had them made.  It was cool to see just how talented these digital artists are!  I thought I was good at photoshop, but I don’t hold a candle to these guys! (Yes, my face is this windburnt!)

Lastly for now, the Korean letterpress museum specially made these letterpressed boards with your Korean name on it for any media that wanted one.  The hospitality has been great and they are always coming up with more things to do and see to help with the grind that is the Olympics.  As for the mascot, you know I had to get a pic! 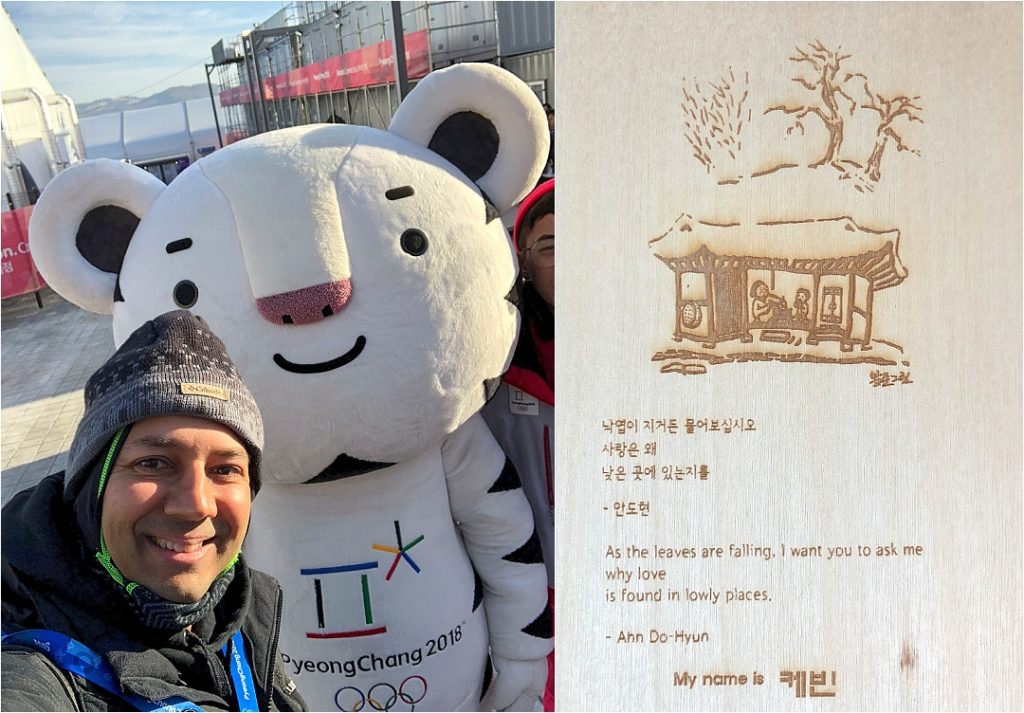 Next up for me is more hockey tomorrow followed by some Big Air Snowboarding which should be fun!  Talk to you guys soon!

Kevin, again images and thanks for writing the blog. Love reading what you see. Thanks

The Iron Man ones are unreal. I love the creativity athletes put into their helmets.

How bad were the winds there?

Winds can be brutal at times!