Well I have a little under a week left here in PyeongChang and the weather was actually a bit warm today!  In fact, I didn’t even wear gloves for the first time!  What makes this place SO cold usually is NOT the temperature.  It is the ridiculous biting wind that the locals call “Knifewind.”  I have been wearing 5 layers of tops and 5 layers of bottoms to the point that I feel like the Michelin man!  When the wind howls like it does at night, all those layers do not matter as it’s still freezing.  Most of the venues give out free hand and foot warmers and I have been putting 3 warmers in EACH pocket and that still has been iffy at times!  The first night of women’s skeleton, the wind was roaring around 40 mph at times and I could barely feel my fingers to take photos! But, everyone has to deal with it including the athletes so we all do the best we can. 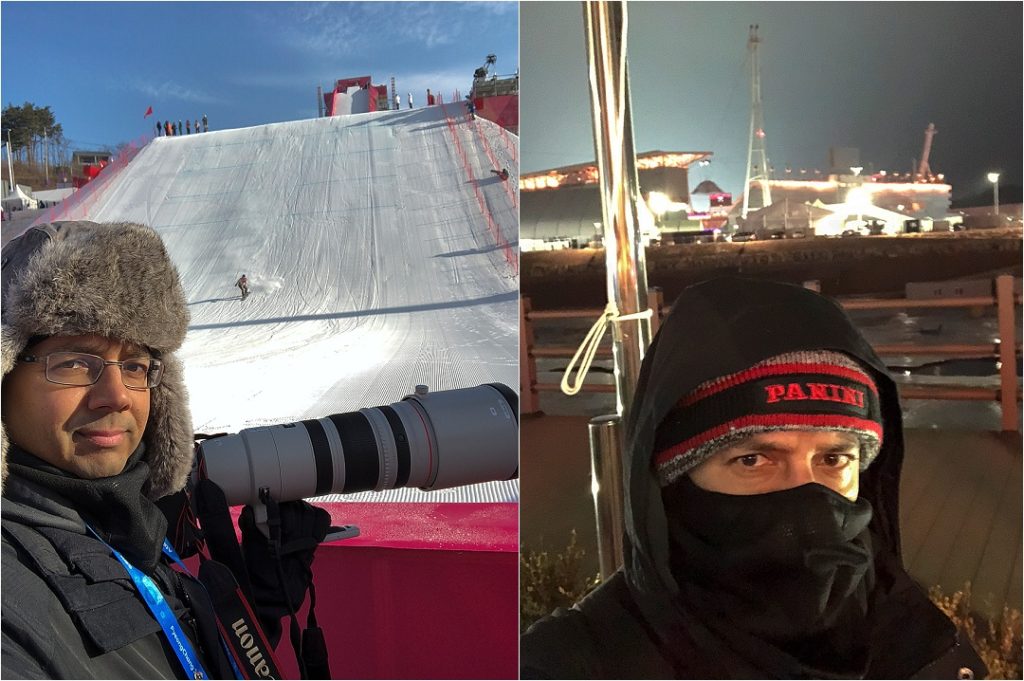 Since my last update, I had the chance to cover another woman’s hockey game.  It wasn’t the most skilled contest, but I did manage to get a few shots I liked… 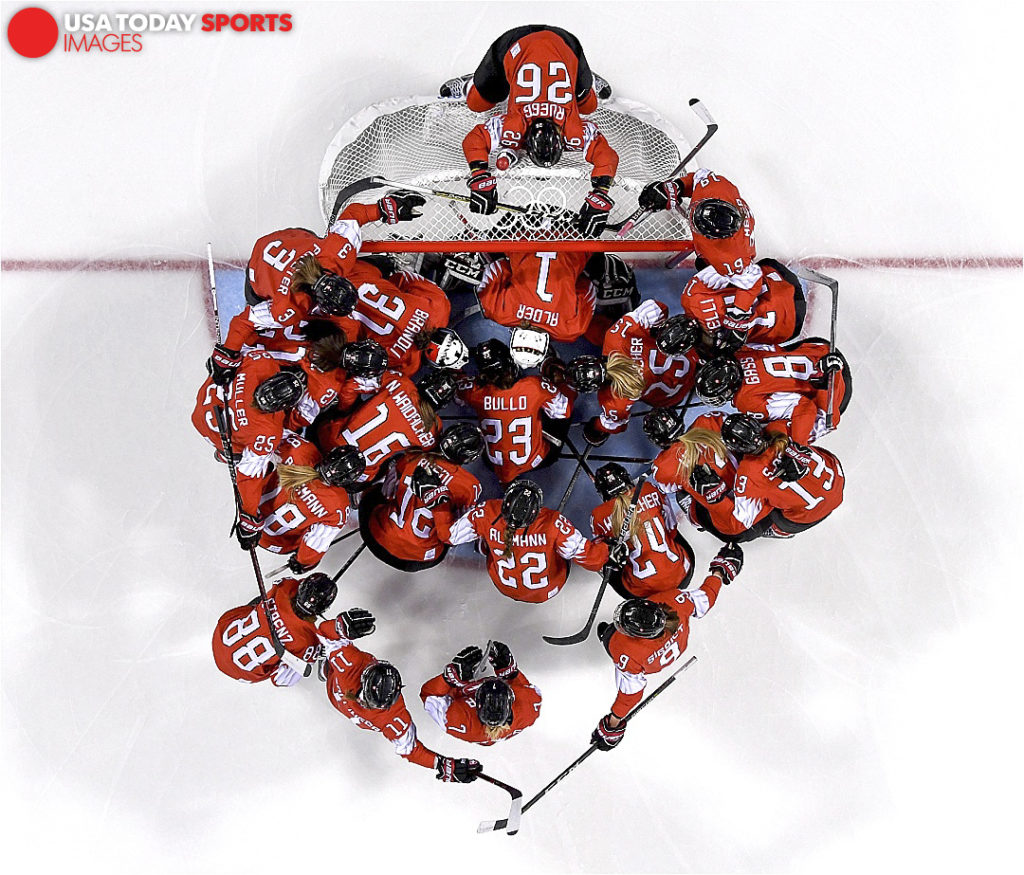 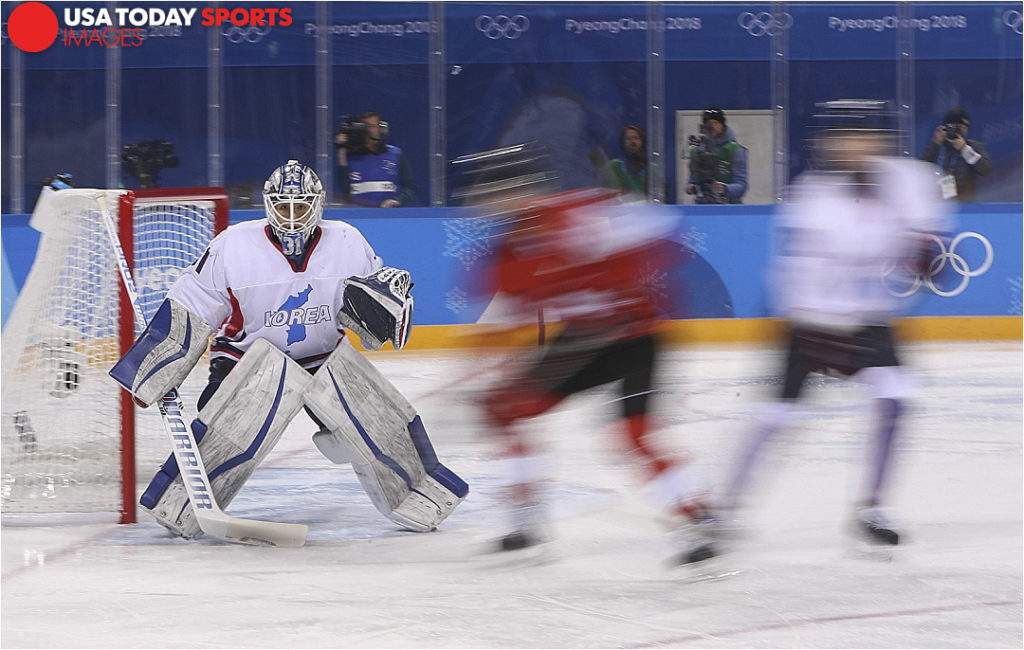 After hockey, I had the chance to photograph my first Medal Ceremony at the Olympic Plaza.  I had a total of 8 ceremonies to cover and it is really pretty cool and emotional seeing all of these athletes receive their medals and hear the anthem of the Gold medal winner.

Before the ceremonies started, there were some Korean dancers that twirled around in the dark with lights and I thought it made some pretty cool photos! 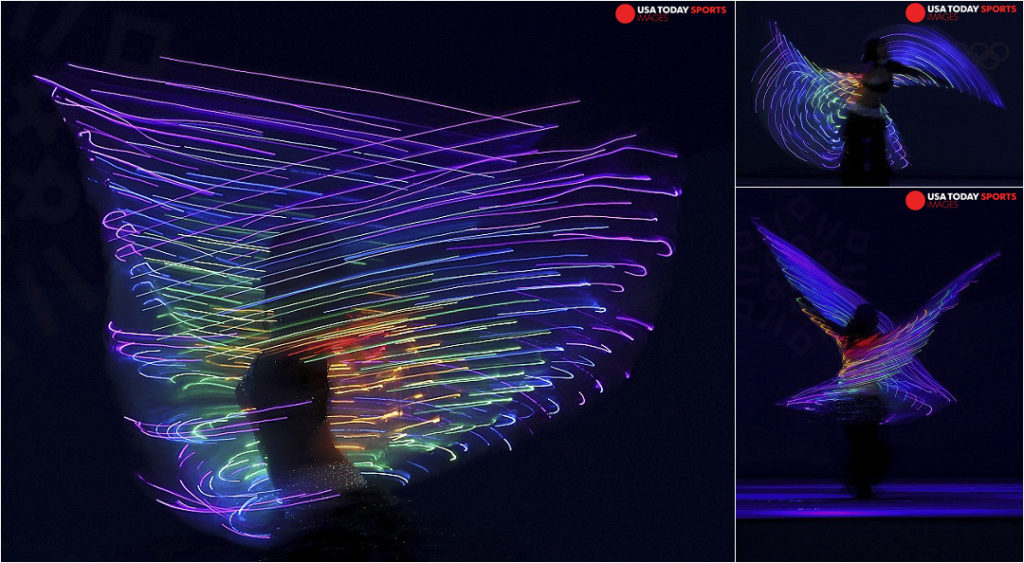 Since I do work for USA Today, capturing images of Americans on the medal stand is pretty important.  Since USA has only won 10 medals so far, it was pretty cool to photograph 2 in one night!

A funny moment happened when Team USA Slopestyle Freeskier Nick Goepper went to the Bronze podium instead of the Silver one and had to be told he was at the wrong place.  It made for some funny photos before he was awarded the silver medal.

Next up was a new event in the Olympics called Snowboard Big Air!  This is where snowboarders slide down onto a huge ramp and do some crazy aerials before landing for the judges.  I had a chance to hang out with some Olympic snowboarders in Park City awhile back and one thing they all told me is that they absolutely detest photos where they are flying through the air and there is only a blue or gray sky behind them.  They told me that they want to see mountains, trees, landmarks, etc… With this in mind, my finish line spot was not conducive to this as it’s really to get the landings and expressions on the final rounds.  Well, since this was only run 1 and 2 of their competition, I decided to hike up a nearby hill to get to an angle where I could at least see some trees or mountains in the back for a few photos… 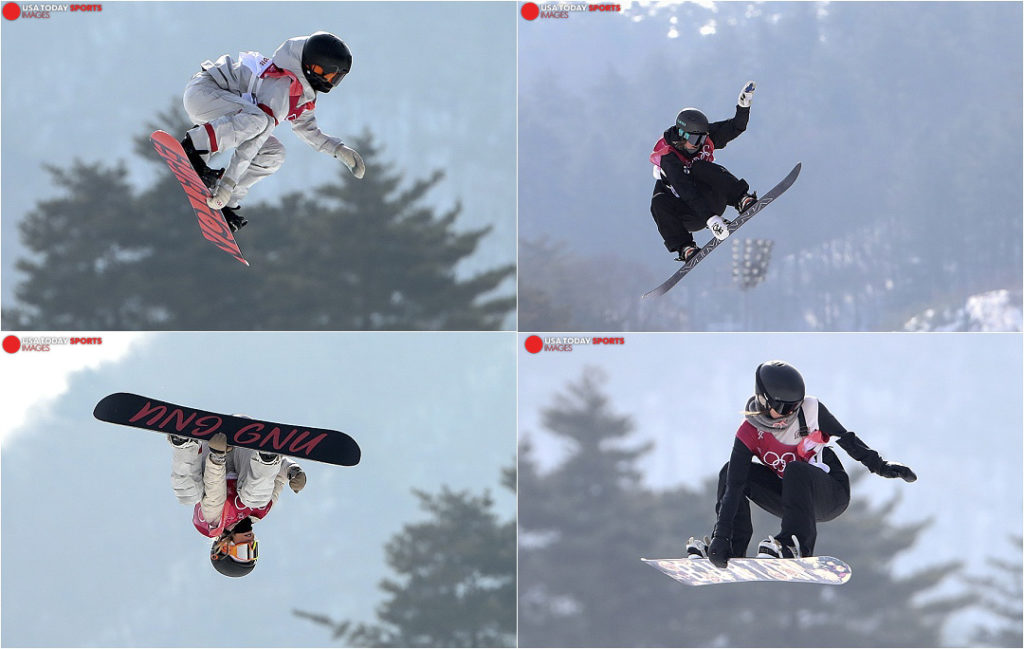 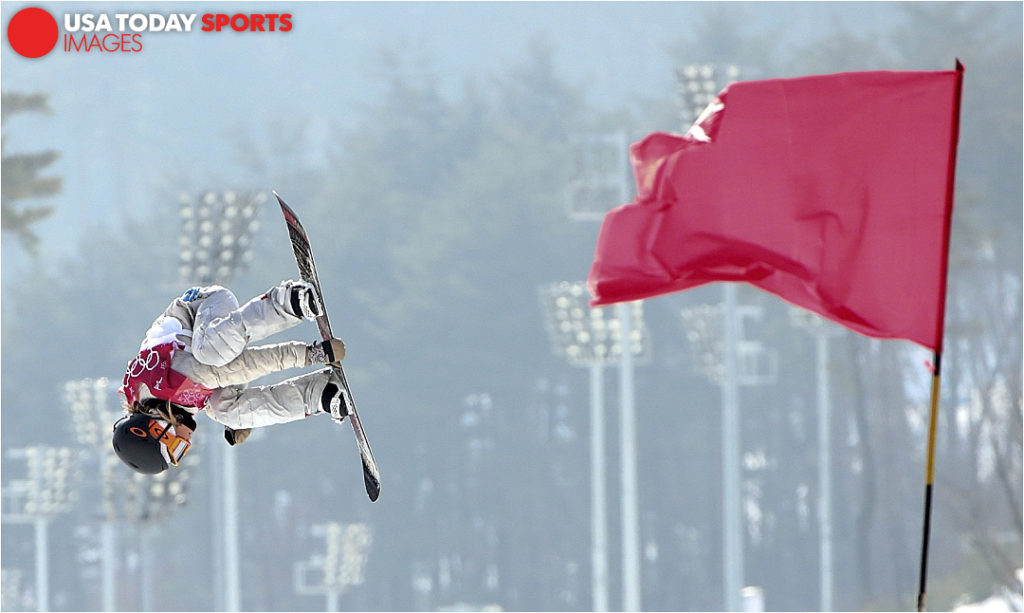 After I got a few of these, I hiked back to the finish line to see if I could get any crashes, etc… I would be in luck as there were a plethora of wipeouts that made for some great photos! 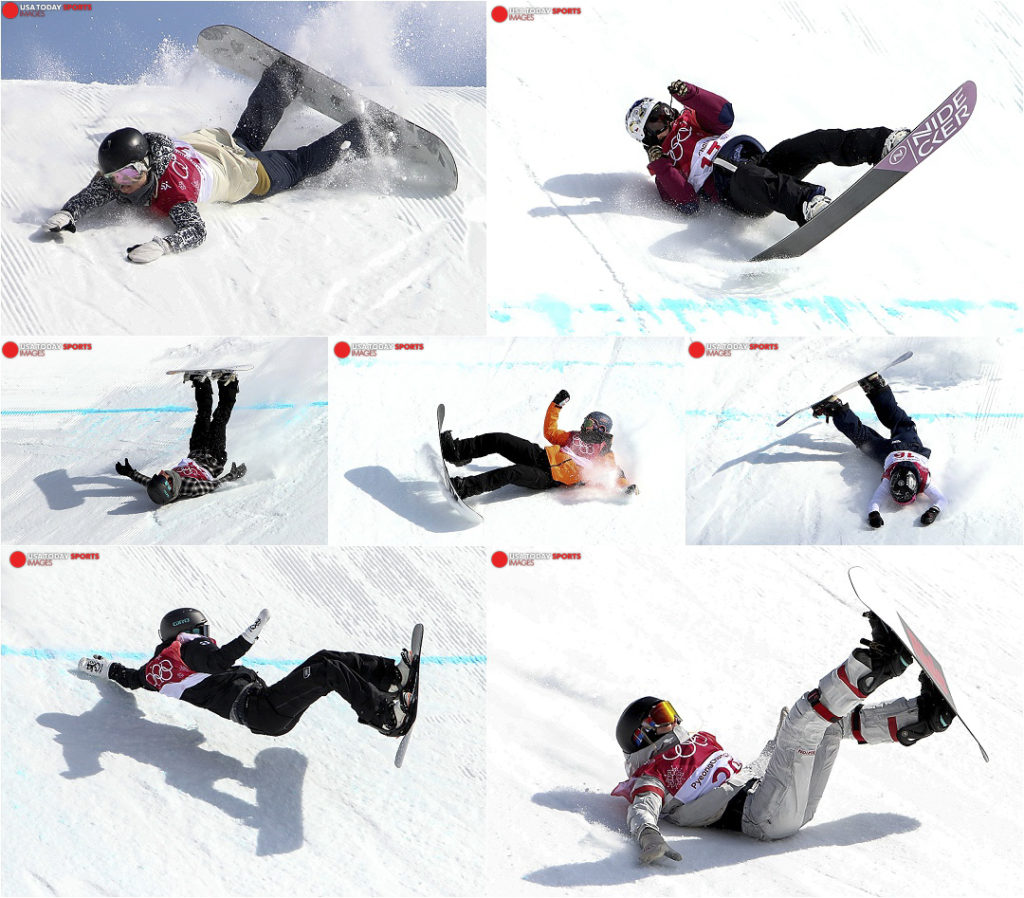 Since I burned like a zillion carbs running around this place, I treated myself to a Baskin Robbins strawberry Milkshake afterwards! 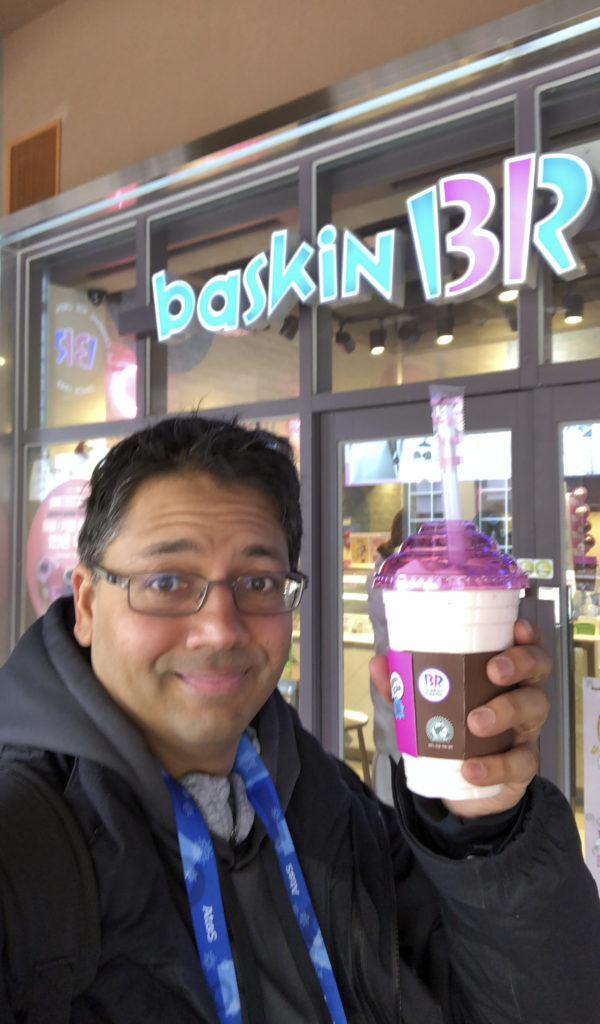 Since I had a late starting hockey game tonight, I decided to head out to the Gangneung Jungang Seongnam Market with a few fellow USA Today photographers to look around and grab some lunch.  This place was really cool with all the food everywhere.  Vendors were selling everything from herbs and spices to seafood and clothes.  We had a great time looking around and trying new things! 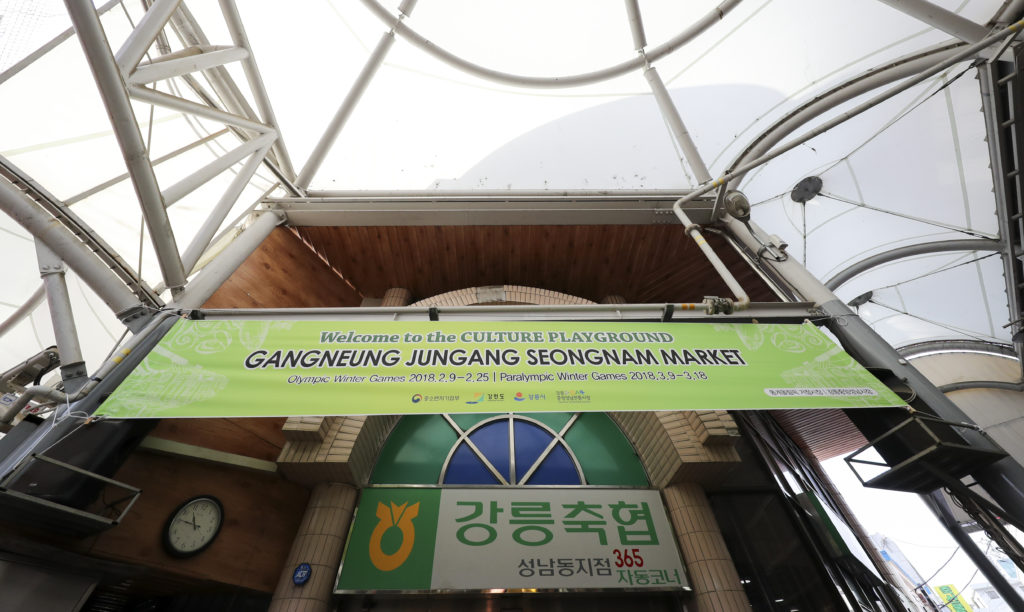 As you can see, dried seafood is very popular here… 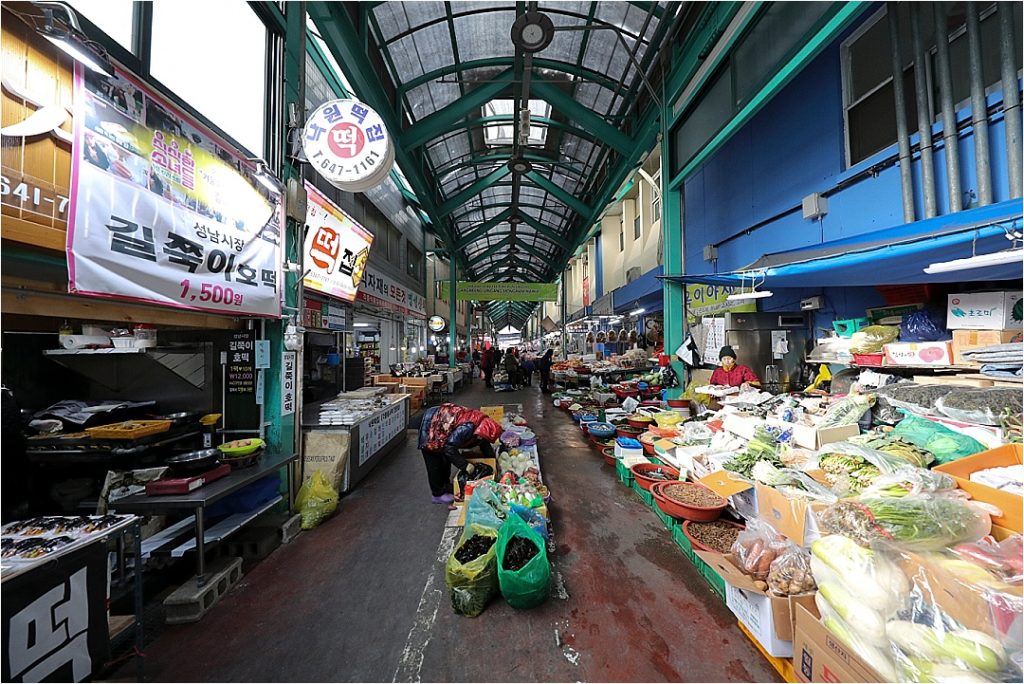 We had heard about these pancakes mixed with cinnamon and ice cream so we watched folks working on them and decided that we would grab lunch before trying these out. 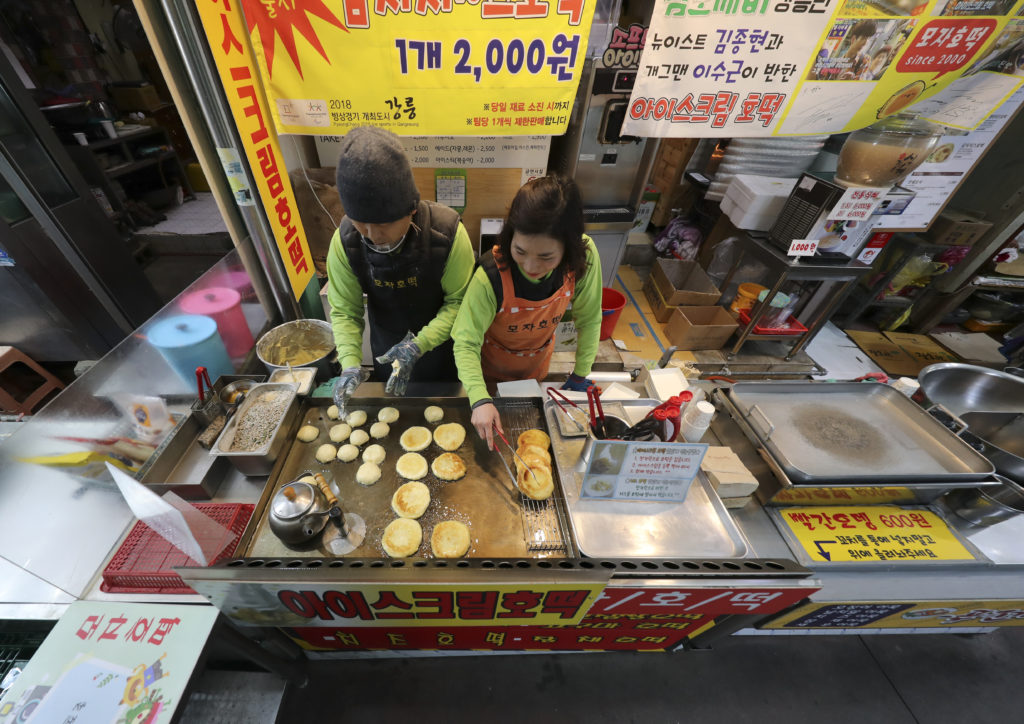 I thought that there was a lot of fried food back in Texas!  The folks here are known for their fried chicken and shrimp amongst other things.

I had never seen dried Rays before or the way the chicken was fried up!  Very interesting!  Seaweed is also VERY popular here.  I’m not a fan but I hear it’s very healthy for you! 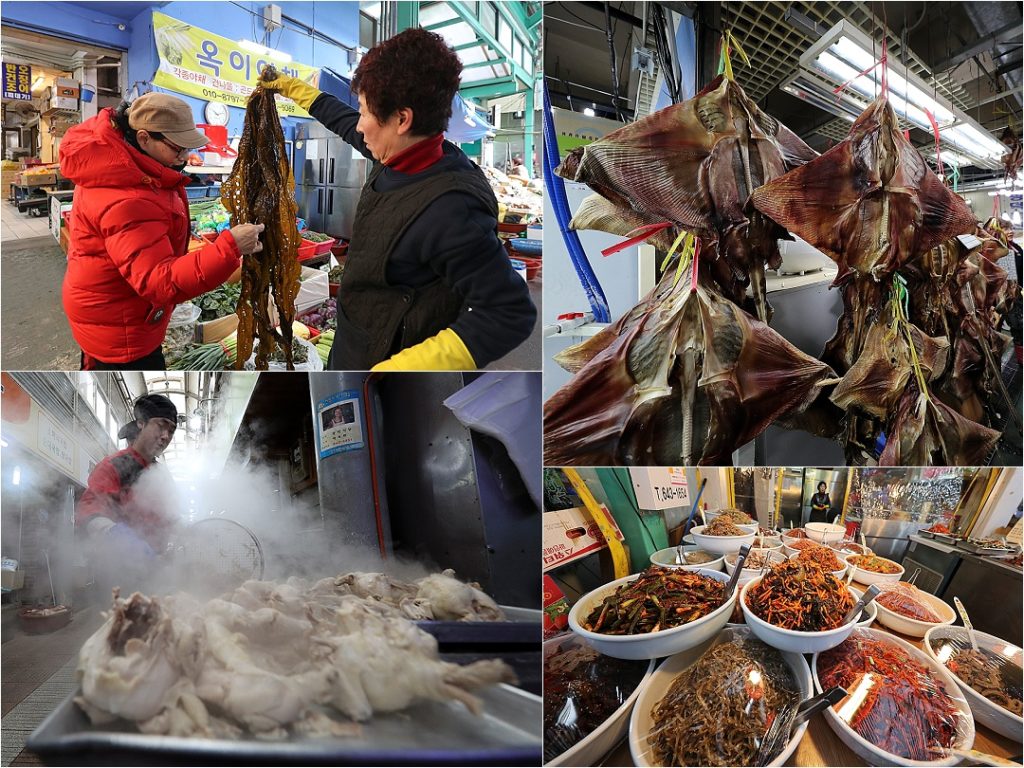 This pink place of fried goodness is what we decided on!  We tried both the fried chicken and the shrimp.  It’s not a big place, but it worked!

My absolute favorite part was trying these amazing pancake, chocolate syrup, cinnamon, and vanilla soft serve ice cream treats!  As you can see, this made everyone’s day! 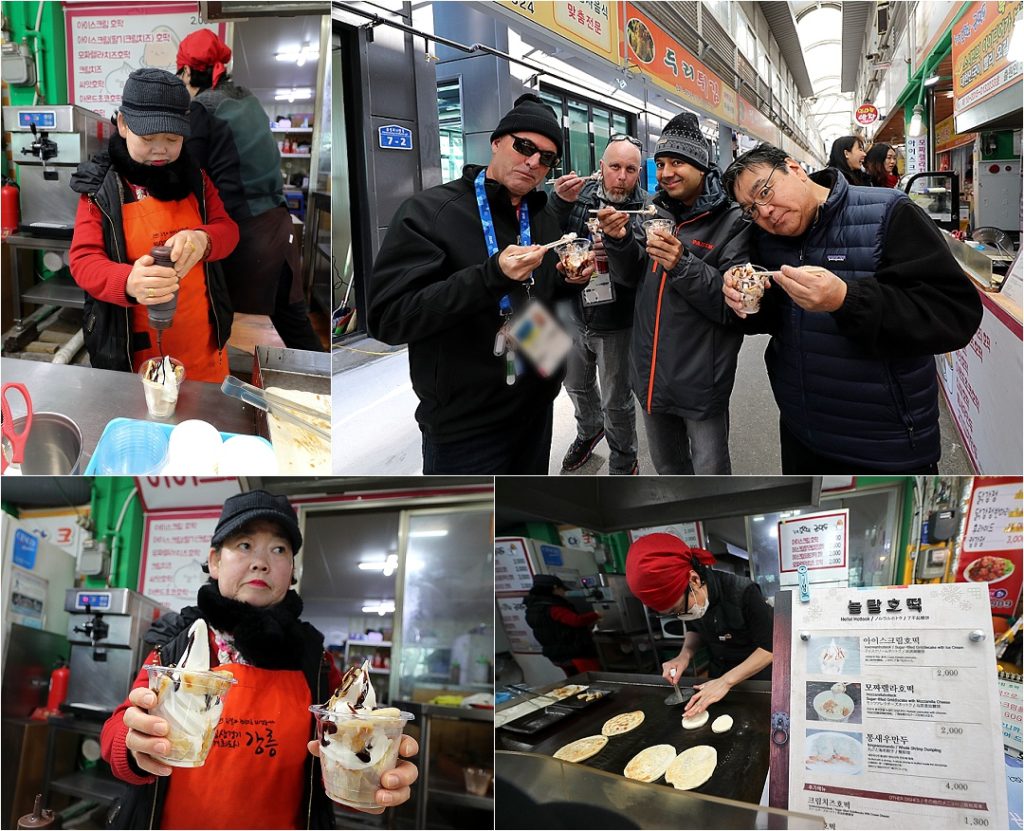 There were also lots of clothing options that had us all wishing that we had known about this place!  We could have bought all our winter clothes here for a fraction of the cost as we did in the US and also not have to worry about packing everything!  As you can see, the stuff is pretty legit!  🙂 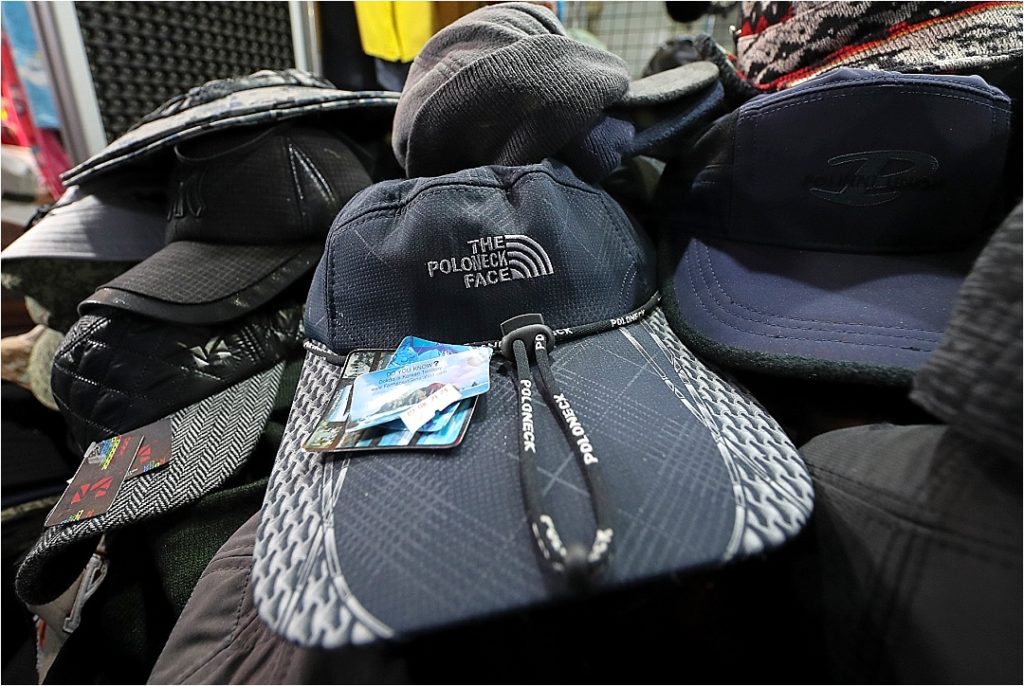 Before we left, we found a guy from Tulsa who volunteered to take a photo of our group… 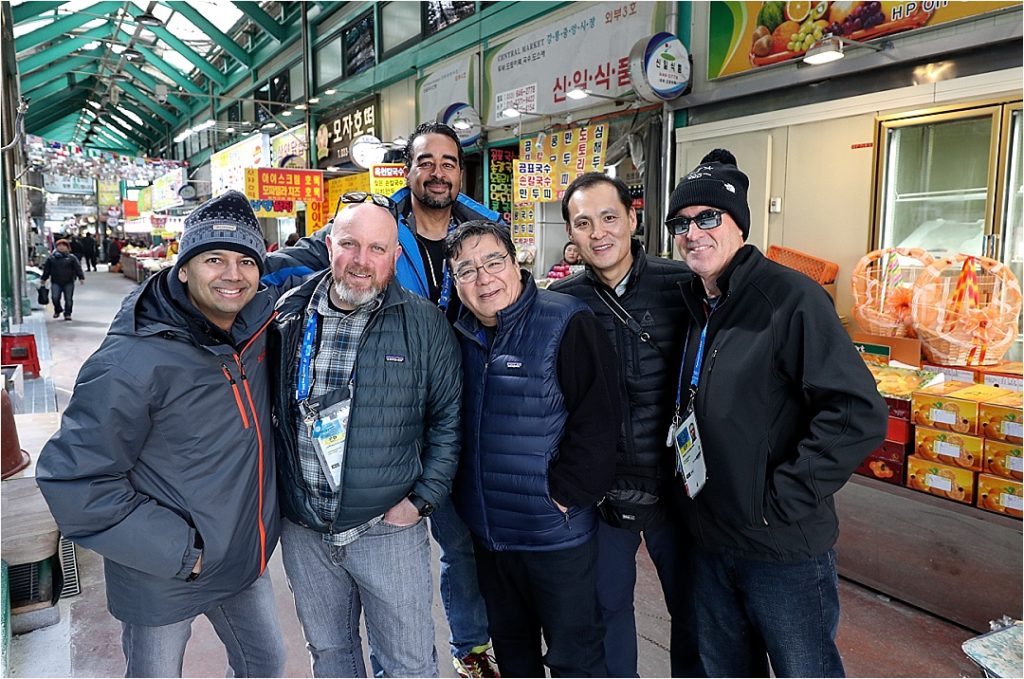 Lastly, I took my real camera and got some really cool photos that I think I will eventually make into art pieces to make some prints.  I’ll leave you guys with a quick preview of one that I will work on when I get back to the states… 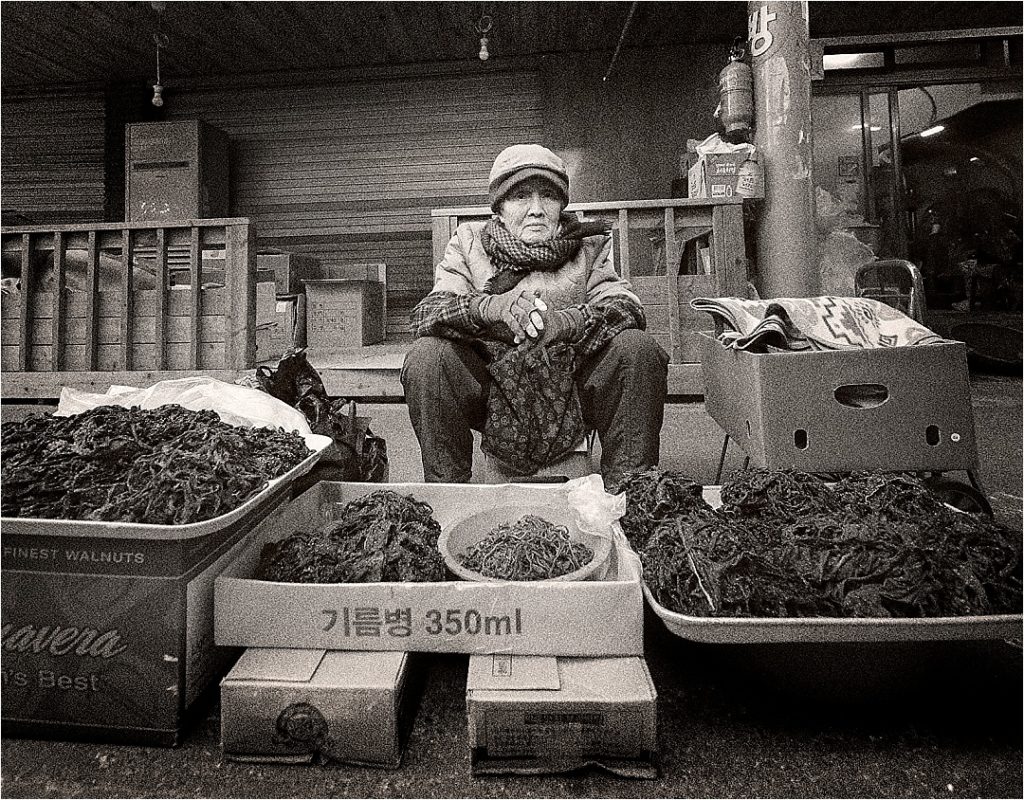 I cannot believe that there are only a few days left but they are filled with lots of great action!  I have some men’s hockey tonight followed by bobsled tomorrow and the Men’s Alpine Slalom on Thursday.  Thanks again for reading!

Thanks Kevin, I really enjoyed your stories and amazing pictures of the Winter Olympics. You are a very good storey teller.